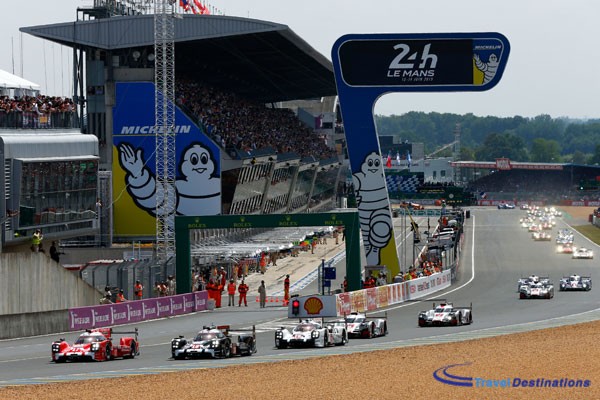 (In no particular order)

1. See 60 cars racing on the famous Le Mans circuit. For the first time since the 1950s there will be 60 cars at the start of the Le Mans 24 Hours. Thanks to the four new pits built in record time 9 LMP1s, 23 LMP2s, 14 LMGTE Pros, 13 LMGTE Ams and the car in the no. 56 garage will be on the grid on the 18th June.
2. Catch a glimpse of Brad Pitt, the honorary starter of the 84th event, as he waves the French flag to unleash the 60 cars.
3. See if Porsche can repeat its 2015 victory. The German manufacturer made its comeback to the LMP1 category in 2014, and took only a year to enjoy a perfect season with a win at Le Mans, and the drivers’ and manufacturers’ titles in the FIA WEC.
4. Share your pleasure between endurance and football. You don’t have to choose between the 2016 Euro Football Championship and the Le Mans 24 Hours as all the matches will be shown live in the Le Mans 24 Hours village.
5. See the no-holds-barred battle in LMP1 between Porsche, Audi and Toyota who will each enter two cars. After the first two rounds of the FIA World Endurance Championship picking the winner of the 2016 Le Mans 24 Hours is like looking very difficult; especially as you will have to beware of the experienced private teams of Rebellion Racing and Bykolles Racing.
6. See Ford’s return. It is 60 years since Ford’s first victory at Le Mans and the American manufacturer is making its big comeback in the LM GTE Pro category with four cars.
7. See if the Hong Kong team (KCMG) will defend its LMP2 title against a horde of highly-motivated challengers (with Nissan engines) determined to oust them from the top spot and claim the trophy.
8. Enjoy an exceptional view of the track from the new revamp of the Indianapolis/Arnage spectator zone. The cars arrive at full speed and have to round a slightly banked corner. Don’t miss this spectacle – especially during the night.
9. See a home win. While French constructors have virtually no chance of emerging victorious in the overall classification, Alpine, Ligier and Oreca are strong contenders for first place in the LMP2 category in which they represent 18 out of the 23 entries.
10. Enjoy a full week of entertainment. Starting in the Le Mans town centre, numerous forms of entertainment will be on offer for the spectators between 12th & 19th June: scrutineering, Drivers’ Parade, pit and track walks, concerts and autograph sessions.
11. Enjoy the intense and always competitive battle between the five manufacturers in LMGTE Pro: Ferrari, Porsche, Corvette, Aston Martin and Ford.
12.  Experience the sounds of the three concert evenings on Wednesday 15th, Thursday 16th and Saturday 18th June. Included on the bill are: Shake Shake Go, Julian Perretta, The Shoes and The Avener.
13. Cheer on the British drivers at the start. British drivers lead the way in terms of numbers with 38 drivers at this year’s Le Mans 24 Hours Next nearest are French drivers with 32 on the grid.
14. Ladies can come and discover the Women’s Pavilion Year that returns this year. In 2015 it was a great success, and this year the venue entirely devoted to women will reopen its doors with several innovations on its programme.
15. Follow the performance of the gentlemen drivers entered for the Le Mans 24 Hours in the LM GTE Am category. This is usually hotly-contested fight that often goes down to the wire.
16. Dive right into the core of the latest virtual reality technologies thanks to the Virtual Room, which will offer a young, connected public a more than real plunge into the thick of the race.
17. Follow the race from the ACO Club zones reserved for the ACO members, which you can join on the day if you wish.
18. See the new LMP3s and GT3s racing on the full Le Mans circuit for the first time. The Road to Le Mans race, a curtain-raiser to the Le Mans 24 Hours, will give these two categories the ideal theatre in which to go head-to-head in a new 1-hour event. There is also the Ferrari Challenge Trofeo Pirelli to enjoy before the main event begins.
19. Run into the 2016 Miss 24 Heures. 105 candidates from all over France entered but there is only one who can wear the crown. The winner will be chosen on 4th June.
20. Discover the talented endurance drivers from Asia. Beside Toyota in LMP1, several teams and drivers come from Asia like Eurasia Motorsport (Philippines), Baxi DC Racing Alpine (China), KCMG (Hong Kong), Team AAI (Taiwan) and Clearwater Racing (Singapore).
21. Stroll through the Le Mans 24 Hours village and discover the many boutiques, exhibitions, restaurants with varied menus, stands, and activities throughout the race week.
22. Support the two women drivers. The two female drivers will be making their Le Mans 24 Hours debut. 26-year-old Inès Tattinger from France is entered in the Pegasus Racing Morgan in LMP2, and Christina Nielsen from Denmark is in the LMGTE Am class in a Ferrari run by Formula Racing.
23. Visit the ACO Historic exhibition which, this year, will be devoted to Americans at Le Mans, and get close to no fewer than 15 beautiful American cars that have marked the history of the Le Mans 24 Hours.
24. Enjoy a unique experience at the 84th running of the most mythical endurance race in the world and then begin your planning for the 85th Le Mans 24 Hours with Travel Destinations.