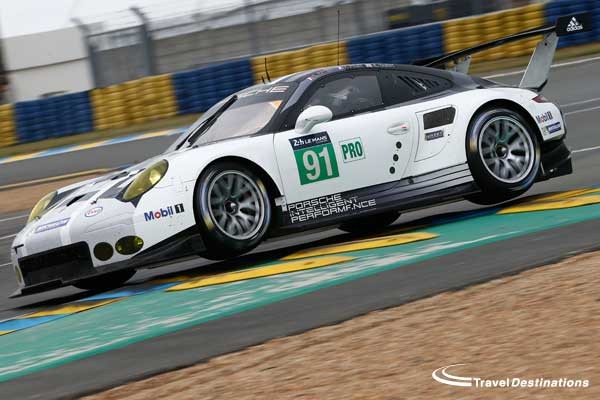 The 2016 GTE Pro class at Le Mans, consists of a 14 high-quality entries, with a wealth of manufacturer efforts including the return of Ford on the 50th anniversary of its maiden win. Five marques are represented in the field, with the seven full-season WEC entries being joined by two Ford entries from IMSA, two factory Porsches, an IMSA Ferrari from Risi Competitizione the two factory Corvettes.

Make no mistakes about it, this is going to be a dogfight, one we may well remember for a very long time to come. Here’s 10 key storylines to follow in this year’s Pro battle:

1. Ford’s return
It’s becoming ever more clear that Ford is desperate to win this race. The team – run by Chip Ganassi – already stated its intentions last year when it announced it would bring four cars to France, but since then the reception and sheer amount of of exposure of the car from the ‘Blue Oval’ has put this programme on another level. The car has won a race heading into June, after a magnificent fuel-saving run provided a surprise victory from one of its IMSA cars at Laguna Seca, which was a big moment for the programme. Prior to the big race the car has been handed a weight reduction too, which should up its pace on race week. By how much? Few people know, but it could put the Fords into contention after very quiet outings at Silverstone and Spa in the WEC. 2. Balance of performance blues
It’s dull, but sometimes it has to be spoken about. The BoP changes appear to have aided Aston Martin and Ford and kept Ferrari, Corvette and Porsche at bay. The issue isn’t whether or not BoP should be enforced, it’s how it will play out. After receiving a significant weight reduction, the gap from Ferrari and Corvette to Ford was much the same at the Le Mans Test Day, which means Ford were either playing games or are extremely disappointed. It could be a very interesting final qualifying on Thursday night, as the pace of the GTE cars could be off the charts.

3. The champs return!
2015 Le Mans winners Earl Bamber and Nick Tandy, while unable to defend their title, will be in the race with Porsche, and likely eager to make an impression. Both drivers had a rough outing at the Nürburgring 24 Hours last month, with their co-driver Kevin Estre crashing in Top 30 Qualifying and Tandy also having a shunt in the race’s opening laps. The expectation of the 2016 Porsche 911 RSR is unclear because Porsche as a factory has opted to only compete at Le Mans in GTE in order to focus on LMP1 and the development of the 2017 GT challenger. Nevertheless, I wouldn’t count them out, especially with so much brand new machinery and technology in the class. 4. Magnussen tooking to bounce back
After his hefty shunt at the Porsche Curves during Qualifying last year, forcing the #63 Corvette to withdraw from the event before the race, Dane Jan Magnussen will be looking to move on and score a good result. A real fan favourite over the years, 2016 is Magnussen’s 18th start. Along with Spaniard Antonio Garcia and Ricky Taylor, he has a real chance to get a fifth class win too. Corvette should never be counted out, and the trio all have enough experience at the circuit and in the car to be right up there.

5. The 488’s grand debut
The Ferrari 488 GTE is the first turbo-charged Ferrari to race at Le Mans since the F40, and it has the potential to do damage in the first year of its development cycle. It’s no secret that the 458 and 430 before it evolved into race-winning machines very quickly, and the 488 GTE looks to be no different. Reliability issues aside the #71 from AF Corse has dominated in the WEC this year, controlling the race at Silverstone and inheriing the win at Spa after the #51 had mechanical issues with 10 mintues remaining. The real worry is reliability here, as the #51 has had issues all year, but the pace of it isn’t. If Davide Rigon, Sam Bird and Allessandro Pier Guidi have a faultless run to the finish, then look out! And if they win, they’ll take a very controlling lead in the WEC points standings too. 6. Brits galore!
For all Brits travelling to the race looking to support the locals, look no further than the GTE class, which is packed with drivers sporting union flags on their overalls. All of them are factory drivers too.
Marino Franchitti, Richard Westbrook, Harry Tincknell and Andy Priaulx are driving a Ford GT, Darren Turner and Jonny Adam are in Astons, James Calado and Sam Bird are piloting Ferraris, and Nick Tandy and Oliver Gavin will be in a Porsche and Corvette respectively.

7. Risi’s return
For the first time since 2010, a red Risi Competizione Ferrari will be competing at the French classic. The American squad is looking for its fourth class win at the race, after most recently winning the with the 430 at the turn of the decade. With ex-F1 star Giancarlo Fisichella, Ferrari GTE stalwart Toni Vilander and Matteo Mallucelli aboard the car should be quick too. It’s good to see them back!

8. Aero makeover
Anyone standing trackside at the race who hasn’t studied the new crop of GTE machinery could well be in with a shock. The aggressiveness of the cars has been ramped up to 11, with the Ford GT and Aston Vantages in particular looking like birth childs of DTM and LMP1 cars. One glance at the rear of the new Aston will tell you one thing: downforce is key now. Nobody knows just where this class will end up in the future, but right now, if you look over at one and squint your eyes, it’s like we’re back in the GT1 days again. 9. Factory stars in factory cars
As was eluded to in the British driver paragraphs, the amount of factory drivers in the race is staggering. Every car in the 14-car field is packed with top class factory talent, with only Phillip Eng and the aforementioned Pier Guidi and Malucelli being exceptions; though even they are factory nominees. The quality of teams and drivers has literally never been higher at the top end of GT racing at Le Mans, so soak it in, sit back and enjoy. This is a golden era.

10. Tyre war
It’s been a while since GTE Pro at Le Mans has seen a tyre war, but it looks like competition between rubber manufacturers is back, and here to stay. Aston Martin has signed a technical partnership with Dunlop, and 2016 is the first year. While the tyres being used this year are pretty much an unknown quantity, both Aston and Dunlop will be looking to make the most out of running in mixed conditions – if there is any. Michelin vs Dunlop could be interesting in 2016, especially if the weather becomes a real factor. And it most definitely will in the coming years after further development of bespoke compounds for Prodrive’s machines.