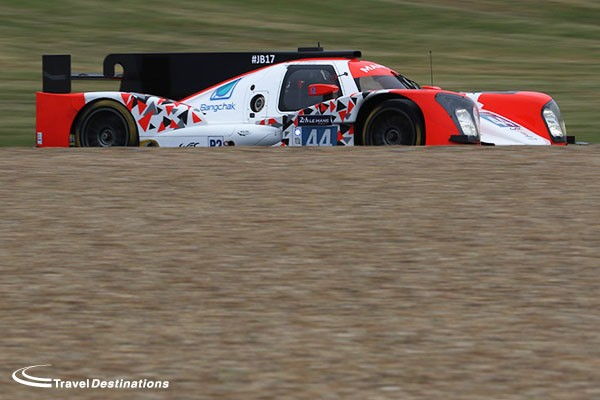 2. Nissan vs Honda vs Judd
There are three different engines represented in the field, and it’s likely to be the last time we see at least two of them here with a chance of winning the class. Nissan dominate in the numbers game with 20 of the 23 runners featuring their venerable but hugely effective V8. But it will cease to be a competitive proposition from next year with a ‘spec’ Gibson V8 to be on tap with more than 100 bhp more than the current crop. Similarly the BMW block-based Judd will be outgunned next season, the Rugby-built engine features in just a pair of LMP2s, the So24! Liger and the Race Performance Oreca, neither are expected to be at the sharp end of proceedings, but they’ll sound great in the midfield! The twin turbo Honda V6 meanwhile has only one taker this time out, the very Orange Ligier of Michael Shank Racing – a very accomplished outfit on their Le mans debut, Audi GT star Laurens Vanthoor is the quick man here but he may not be enough to keep them in the mix and prevent a Nissan whitewash

3. Oreca blitz testing
An Oreca 05 Nissan won the class last year and that result certainly helped a sales drive – No fewer than seven of the cars are back this year, two badged as Alpines, but those cars are identical to their Oreca siblings. And the car seems to have retained its performance advantage – For much of the Test Day, held two weeks prior to the race on the same circuit, the Oreca/ Alpine squad filled the top seven slots on the timing screens, late session efforts from Laurens Vanthoor (Ligier Honda) and Jake Dennis (Gibson Nissan) were the only runs to spoil the pattern! 4. Audi Factory drivers in P2
A trio of Audi factory drivers grace the LMP2 field, two are refugees from the cancelled third LMP1 Audi, this a victim of the fallout from the VWGate emissions scandal. Rene Rast is with he G-Drive Oreca effort, he was right in the thick of things at the Test Day and looks set to be front runner in the team’s #26 Oreca Nissan. Felipe Albuquerque is similarly inconvenienced by the lack of a third R18 this year but the Portuguese is already a race winner in LMP2, last year in the ELMS with Jota Sport and this season with a win in the opening WEC race of the season at Silverstone in ‘his’ #43 RGR By Morand Ligier Nissan; and Laurens Vanthoor, the coming man in the Audi camp. Almost peerless in GT3, he races convincingly well here last year in a Ligier Honda and will pilot a similar car this time around.

5. ESM triple crown
Extreme Speed Motorsport have swapped their 2015 Honda Power for Nissan in 2016 and have also moved the team into the Oak Racing Workshops here at Le mans from their previous in-house operation. They come to Le Mans with a unique feat in mind. The team’s solo (and still Honda engined) car triumphed overall earlier this year in both the Rolex 24 Hours of Daytona and the 12 Hours of Sebring – A Le Mans win would make a nice set, 2016 new addition to the team Pipo Derani was the undoubted star for the team in the US races an he’s joined by another quick Pro, Ryan Dalziel in the #31 car for the full WEC including Le Mans. One major visual difference for the #30 and #31 cars here – Strict French laws concerning alcohol sponsorship once again prevent the team from promoting Tequila Patron – the black and green livery therefore changes for a one-off outing for the cases in white and black Paul Mitchell hair products livery.

6. BR01 From Russia With Love
The Russian flagged SMP Racing squad have their pretty pair of BRO1 Nissans in the race. Designed by prolific sportscar designer Paulo Catone the car should be on the pace. The team will be super keen to bring home a result and have shuffled their squads to boost their chances with ex Peugeot factory man Nic Minassian sharing the #27 car with 2016 IndyCar star Mikhail Aleshin and semi-pro Maurizio Mediani. In the sister #37 F1 refugee Vitaly Petrov returns to Le Mans for the first time in 10 years to anchor the car alongside 2015 GTE Am winner Viktor Shaitar and team regular Krill Ladygin in an all-Russian line-up. 7. G-Drive Gibson record
Just five open-topped cars remain in the LMP2 class this year, and the #38 G-Drive car is the one most likely to feature at the sharp end of proceedings. This is the very same chassis that has raced for the the team for the past five seasons and has won this race, just two years ago with a stunning fightback drive. They almost repeated the feat last year with second place after a startlingly similar stumble at the very start of the race. Now they’re back for another crack, likely their last with the Gibson chassis. Simon Dolan, team co-owner is an ever present in the team, a massively committed non-Pro driver who truly measures himself against his Professional colleagues. His full season partner this year is another F1 refugee Giedo van der Garde who anchored the team to a race win in the opening ELMS round this season with a very quick stint. Rounding out the trio is young British Driver Jake Dennis, with van der Garde a Le Mans rookie, and also a very quick driver indeed, clocking the fastest non-Oreca time of the Test Day – These guys are still very much in the hunt!

8. Manor
Manor Motorsport’s arrival in the FIA WEC was one of the biggest stories of the beginning of the 2016 WEC season. John Booth and Graeme Lowden looked jaded buy the effort to break through in the notoriously harsh environment of the F1 paddock and look reborn now! They have one regret, that they did not initially enter two cases for the full WEC. By the time they pushed the button on their second (#45) Oreca 05 it was too late too get the car into the Le Mans 24 Hours. The last minute LMP2 driver merry go round though rather strangely sees five of the Manor six on the grid for the 24 Hours. Tor Graves stays aboard his full season #44 car where he is joined by Roberto Mehdi and Matt Rao from the sister #45 – Rao bid higher than regular #44 driver James Jakes for the LM24 seat whilst Mehri stepped in after Will Stevens took the offer of a seat with G-Drive for Le Mans only in the #26 car. The third #45 driver meanwhile, Richard Bradley, will race in the #47 KCMG Oreca!

9. KCMG Return
Back for a one-off race to defend their Le Mans win last year are Chinese team KCMG. They field the very same car, again an Oreca 05 Nissan, that took the win last year here, and two of the same drivers too. Richard Bradley has a near full season drive with Manor in an identical car and his confirmation here keeps him in with a shot of the WEC drivers title, double points are on offer for WEC runners at Le Mans. Matt Howson shared the car in a full WEC campaign with Bradley last season but this is currently set to be his only major race of the season. Tsugio Matsuda is the reigning, and three time, Super GT Champion from Japan. He knows the team, and the circuit, and could be a strong addition to KCMG’s race winning hopes.