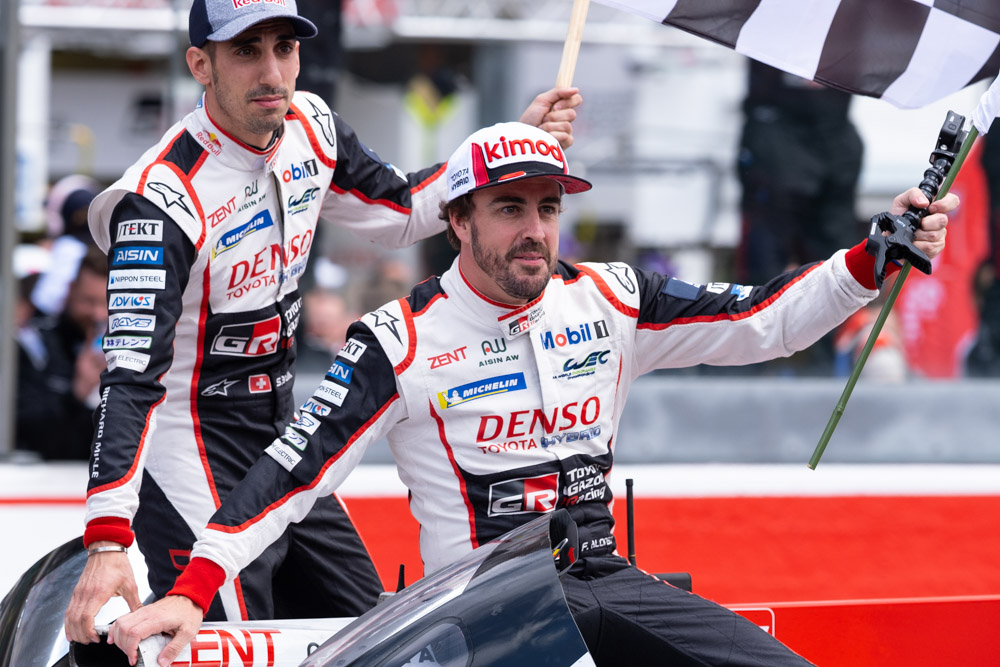 With the delayed 2020 running of the Le Mans 24 Hours right around the corner, Travel Destinations has taken the time to look back at last year’s race, which feels like a very long time ago now!

Le Mans wins are like buses it seems… Having waited decades for its first victory at La Sarthe, Toyota made it two overall Le Mans wins in two years in 2019, with another dominant showing against the privateer pack. Last year’s edition served as the ‘Super Finale’ to the 2018/19 WEC ‘Super Season’ and delivered, in every class, with drama right until the checkered flag fell.

In the end, it was Toyota Gazoo Racing’s No. 8 TS050 HYBRID that took the spoils. It was back to back wins for Fernando Alonso, Sebastien Buemi and Kazuki Nakajima, though throughout the race they were not the quickest of the two crews from the Japanese marque.

The final hour served up a huge bout of confusion, as a faulty sensor for the sister No. 7 of Kamui Kobayashi, Jose Maria Lopez and Mike Conway caused the lead to change between the two TS050s, leaving 252,000 fans in the stands and members of the team, scratching their heads throughout the final stint of the race.

The No. 8 eventually took the victory, after a final hour filled with confused radio messages between Kazuki Nakajima in the winning car and Jose Maria Lopez in the No. 7 and their engineers.

It was rather heart-breaking for No. 7 team, who led most of the second half of the race but came up short, all three forced to wait at least another year to score their first win. It was a cruel end after the car had the pace to win this race all the way to the flag.

The picture became clearer after the race. The No. 7’s tyre sensors indicated that there was a right-front puncture just before the end of the penultimate hour. This forced the team to pit the car. When it pitted, the team changed only the right-front tyre. The sensor was then discovered to have been wrong. So they pitted the car once again, to change the right rear.

After that, the team managed the finish. Alonso, Nakajima and Buemi claimed a second straight Le Mans win and the FIA WEC World Drivers’ Championship.

Behind Toyota, there was plenty of excitement in the privateer ranks. Four of the privateer LMP1s from SMP Racing and Rebellion Racing went toe-to-toe for third place overall.

On Sunday afternoon, though, it would be SMP that would take the ‘best of the rest’ moniker with the No. 11 BR1 of Vitaly Petrov, Mikhail Aleshin and Stoffel Vandoorne. The trio drove masterfully en route to scoring the best result for the chassis to date and AER’s first ever Le Mans overall podium.

By race end it was no longer close between the two teams, as the No. 3 Rebellion was knocked out of contention in the second half of the race after a wild sequence of events. The list of mishaps included a three-minute penalty for supplying officials with the wrong tire serial numbers, a spin into the gravel on the Porsche Curves by Gustavo Menezes and a series of brake issues. All this after the car had to be repaired hastily in the opening hours of the race after Thomas Laurent went nose-first into the barriers down the Mulsanne Straight.

Both of Rebellion’s cars finished though. The best of the two was the No. 1 of Neel Jani, Bruno Senna and Andre Lotterer which took fourth, three laps behind the No. 11 (sole-surviving) SMP machine after the car hit trouble early when the team incorrectly misidentified a puncture, and didn’t recover.

In the other classes there was plenty of drama and excitement too.

LMP2 saw Signatech Alpine won the class, like Toyota, for a second straight year. Though on this occasion its drivers could celebrate on the podium – as in 2018 it was handed the victory via a post-race investigation for the car which crossed the line third. Andre Negrao, Nicolas Lapierre and Pierre Thiriet finished up an astonishing 2018/19 campaign with a pair of Le Mans wins and a world title.

It wasn’t a dominant run as such for the French outfit, but towards the end the of the race its competition from Jackie Chan DC Racing and G-Drive Racing faded.

GTE Pro, with an entry packed with factory cars from Ford, Ferrari, Aston Martin, Porsche, BMW and Corvette, surprisingly, was the only class that was settled early in the 87th edition. It was AF Corse’s year, the Italian team scoring the first win for the Ferrari 488 GTE at this famous race on the 70th anniversary of Ferrari’s first win at Le Mans.

The No. 51 of James Calado, Alessandro Pier Guidi and Daniel Serra was the winning car, the trio emerging as a contender in the race’s opening hours and fighting for the win all the way through the night and into Sunday afternoon. The battle, which involved multiple marques for the win, wasn’t decided on track, and instead by a safety car period splitting up the field in the final hours. After that it was an easy ride for the No. 51 crew, who finished over a minute ahead of the No. 91 and No. 93 Porsches that completed the podium.

While it was a huge result for Ferrari, its rival marque Ford had a forgettable weekend in what was the final weekend for the GT factory programme in the WEC. It had five cars in the race, with four of them entered in the Pro class run by the Ganassi team. The works entries finished in formation from fourth to seventh. In order to challenge, the drivers had to run the cars ragged, not a sustainable option over 24 hours…

Meanwhile in GTE Am, it looked as though the GT would sign off with a farewell victory via its customer car from Keating Motorsports; but post-race technical checks saw the team stripped of what would have been a memorable victory.

The US team, owned by Ben Keating, crossed the line first after Keating himself, Jeroen Bleekemolen, and Le Mans debutant Felipe Fraga survived late drama to beat the Project 1 Porsche to the flag. Seemingly out of nowhere, in a similar fashion to AF Corse’s No. 51 Ferrari in Pro, the No. 85 rose up the order and went on to control the race in Am.

In the second half, it looked almost too comfortable for the American guest-entered team. The trio had built a big lead and looked set to cruise to the finish. But a pit stop to change the car’s front end, requested by the organizers in the penultimate hour, spawned drama. Keating left tyre marks when leaving his pit box, prompting race control to hand out a stop-go penalty.

All of a sudden, with less than an hour to go, the team’s lead had vanished, and the Project 1 Porsche was just a handful of seconds behind after the final stops. It was a straight fight in the end between Bleekemolen and Jorg Bergmeister, the Dutchman soaked up the pressure and made it look easy, eventually finishing 44 seconds up the road.

But the drama didn’t end there. As the following day the team was disqualified due to the fuel tank being in excess of the total permitted for the race. It meant the aforementioned No. 56 Team Project 1 Porsche 911 RSR of Bergmeister, Patrick Lindsey, and Egidio Perfetti, who had already claimed the world title by finishing second, were handed the class win post-race too.