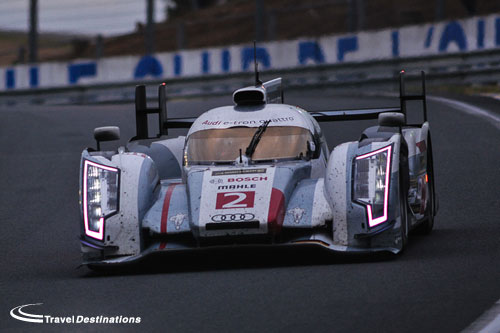 No fewer than 61 cars took to the full Le Mans circuit for the pre-race week Test Day on Sunday in what might reasonably be described as less than ideal weather!

In addition to the 56 full race entrants a further five cars attended with a number of  teams opting to use these, or their race cars to ensure that their drivers were all pre-qualified for the race by completing the 10 mandatory laps that every racer must run within five years of every race they start on the unique Le Mans circuit.

All 168 drivers were present with Audi finishing the day on top with their trio of race entered R18 e-tron Quattros finishin the day on top.

Loic Duval, sharing the #2 Audi with Tom Kristensen and Allan McNish was fastest man of the day, his best effort, a lap in 3:22.583, beating the pole position time for last year’s race and the achievement all the more remarkable after the same driver, in the very same car crashed heavily towards the end of the first of two four hour track sessions. The Audi crew though repaired the car in under two hours and Duval was released to beat the best time from the chasing Toyotas by a clear 5 seconds.

The Toyotas though looked set to improve dramatically had they had the opportunity for clear laps on a fully dry track.

Starring too were the Rebellion Lola Toyotas, as the track started to dry Neel Jani managed to initially get in amongst the factory cars and even managing to briefly top the times overall on wet rubber in the #12 car.

There were no fewer than 24 LMP2 runners on track for the test and 22 of them will start the 24 Hours proper – The #24 Oak Racing Morgan Nissan of Olivier Pla topped the times as the fast Frenchman, who shares the car with Alex Brundle and fast Danish gentleman driver David Heinemeier Hanssen, put in a late flier to beat the best that the fast pair of Alpine Nissans could muster.

Behind the top three were a gaggle of other quick men with Indycar star Mike Conway, BMW factory driver and Nurburgring 24 Hours hero Maxime Martin and GT Academy graduates Jann Mardenborough and Lucas Ordonez all in the top six.

Brits Oliver Turvey and Simon Dolan (Jota Zytek Nissan), Martin Plowman ( #35 Morgan Nissan), Archie Hamilton (25 Delta ADR Oreca Nissan) and Tom Kimber Smith (Greaves Motorsport/ Caterham Motorsport Zytek Nissan) all featured in the lower reaches of the top ten in class too as one of the new Lotus LMP2s crashed heavily, the driver unharmed but the German based team having lots to do in the next week before scrutineering begins for the race proper..

GTE Pro saw Aston Martin grab the headlines in their centenary year with all three of their BV8 engined, Gulf liveried Vantage GTE’s finishing the day in thee top six, and the best of them finishing in a dominant 1,2, Peter Dumbreck topping the times in the #97 car ahead of the sister #99 car.

The GTE race though looks set to be a dogfight as Porsche, Corvette and Ferrari all took turns at the top of the timesheets, though the lead Ferrari of Giancarlo Fisichella had a sizeable shut at Mulsanne Corner soon after grabbing top slot.

Finally in GTE Am it was another Aston Martin 1,2 with Jamie Campbell Walter in the #96 car just pipping the best time from British GT regular Alan Simonsen, the two Gulf cars really bossing the remainder of the class field and looking tough to beat.

Rain or shine there looks set to be a fascinating and close fought 90th anniversary Le Mans 24 Hours in prospect!