While the 2018 Le Mans 24 Hours may be packed with story-lines across all four classes, this year’s GTE battle looks more likely than ever to deliver the best racing in the field. Both GTE Pro and Am have numbers, quality teams and drivers, new cars and some of the best engine notes. They may not have the glamour of the LMP1 field, which features the likes of Fernando Alonso on his ‘triple crown run’ and Jenson Button making his LMP debut, or the sheer numbers that LMP2 has, but it does have 17 factory entries, and 13 further privateer outfits set to do battle, door-to-door, for 24 hours.

GTE Pro is, as it has been for the past few years, made up of pure factory teams. Manufacturers are taking the GTE Pro class increasingly seriously now, and that’s evident in the size of some of these efforts. Porsche and Ford are bringing four cars each to Le Mans and Ferrari is bringing three, while Aston Martin and BMW are debuting their new cars and Corvette is putting a huge amount of resources into what could well be the final run for its hugely popular C.7R.

It is near-impossible to call a winner, even this close to the big race, with so many cars and no weak driver crews. This really is, the most stacked GTE Pro field we’ve ever seen. The question is, who has the edge? Back for a third year, with a quartet of cars, Ford would like to think it has as good a chance as any. After dominating the field during its debut year in 2016, somewhat controversially, and finishing a surprise second in 2017 after the chaotic ending to the race, the ‘Blue Oval’ is back for a third crack at winning on the hallowed French ground.

It is incredible to think that the Ford GT is the second oldest car in the field at this point, only the C7 in its current form has a longer history. It still looks arguably the most modern of the six cars in the class and just keeps on earning silverware wherever it goes. Once again Chip Ganassi’s UK team will join forces with the US outfit at Le Mans, creating what is one of the strongest GT crews in the world. The car’s ability is obviously a major factor, but a big part of Ford’s successes stem from the perfect blend of experienced drivers such as three-time World Touring Car Champion Andy Priaulx and multiple Champ Car winner Sebastien Bourdais, as well as younger talent like Billy Johnson and former LMP2 Le Mans class winner Harry Tincknell. There is no weak link in the team’s 12-driver stable, and the car continues to be almost bulletproof. If the Balance of Performance is as solid as it was last year, and all the marques are in with a shout, expect Ford to be right there, and ready to take a second Le Mans win.

Porsche on the other hand, is searching for its first Le Mans class win since 2013 in GTE Pro, a result which the brand feels is long overdue, especially considering the successes at the top end of the field in LMP1 in recent years. The current 911 RSR though is an absolute monster, which is ready to win, and win now. If Porsche can break through, it may prove to be a very popular victory with fans, as the mid-engined, four-litre, flat-six in the car houses is a screamer. With four entered in Pro (two running retro liveries, that look stunning), Porsche, to celebrate its 70th anniversary, are going for the ‘loud and proud’ approach. To boost its chances of a win, the two additional cars re from its IMSA WeatherTech SportsCar Championship programme, which bolsters its already spectacular driver line up from the FIA WEC, with the likes of overall Le Mans winners Nick Tandy, Earl Bamber, Romain Dumas and Timo Bernhard.

AF Corse meanwhile, has adopted a similar strategy to Porsche, but instead just adding one extra Ferrari 488 GTE. All three running with the 2018 Evo kit. Ferrari is another brand starved of Le Mans wins in recent years, it’s last coming in 2014. It will be hoping that its championship-winning form from last year’s FIA WEC campaign carries over into this year’s race, which is coincidentally the second round of the 2018/19 season.

Corvette Racing, the last of the brands using tried and tested machinery, has its trusty pair of IMSA C7.Rs entered. In what could well be the swan-song for the car, Pratt and Miller’s experienced outfit will be gunning for its ninth class win at Le Mans this year, and, as you’d expect, it has a real chance. The past couple of seasons, the C7.R has won races and titles in the USA, but fallen short on French soil. In 2016, the team were unable to unlock the pace of the car due to the Balance of Performance situation and last year, a titanic battle in the final laps with the winning Aston Martin ended in tears, with the leading ‘Vette limping across the line after multiple offs and tyre troubles when Aston Martin Racing’s Jonny Adam made his move. This time around, they’ll hope it can be different. Don’t count them out! 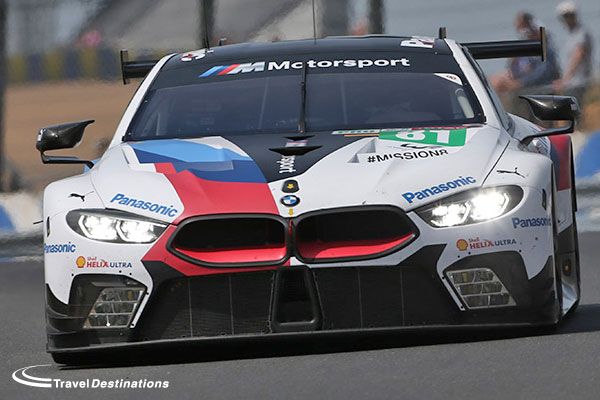 So that leaves BMW and Aston Martin; two brands that have a long, history in sports car racing. Both head to Le Mans with high expectations this year, and new cars that during their pre-season development work already look like race winners. BMW’s M8 may well have the advantage off the bat, after running at both the Rolex 24 and Sebring prior to Le Mans with its parallel IMSA programme. The car, which sounds great in the flesh, and is built like a tank, is likely to capture the imagination of the fans trackside. The brand, which let’s not forget hasn’t had a big result at Le Mans since the turn of this century, comes with an experienced team running its factory operation – MTEK – and a set of drivers more than capable of going toe-to-toe with the GTE Pro regulars. In amongst its crew, watch out for DTM champion and Martin Tomczyk and Spa 24 Hours winners Alex Sims and Philipp Eng; they know how to win big races.

In a class like this though, a driver is only as good as its car. But BMW has ensured that the M8 was put to the test, with multiple runs at a variety of circuits, and in a variety of conditions. So far it appears to be both reliable and fast, almost winning at Sebring in only its second race start. While it remains to be seen whether the Bavarian brand, this early in its programme, can take a big win against such stiff competition, they certainly can’t be counted out. 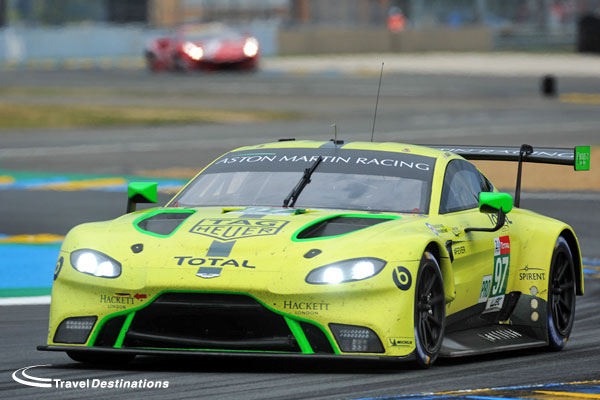 It is much the same story for Aston Martin Racing, which starts 2018 with far more factory support from Aston Martin and a brand new, stunning-looking Vantage. The new Vantage, replacing the previous model which remarkably, raced for 13 years, helps usher in the new era for the brand in motorsport. Aerodynamically it’s far more aggressive, the new turbo-charged Mercedes engine is touted as a revelation in drivability terms and just about every other system in the car is new and upgraded too. The driver-crew has seen a refresh also, with former BMW driver Maxime Martin, and all round rapid Britain Alex Lynn joining the team. The big issue here is that so far this season, the Vantages have struggled mightily. In both pace and reliability, it’s been way off, and at the Test Day, Marco Sorensen has forced the team to build up a brand-new chassis for the race after a heavy impact on the run down to Indianapolis during the morning session. Even with the other car managing a full day of running, the signs aren’t good; the No. 97 was just under five seconds off the pace. Now, this is GTE Pro, and things can change quickly, so don’t count them out just yet.

So far, it looks as if Porsche and Ford have the upper hand. At the Paul Ricard Prologue, the season opener at Spa, and the Le Mans Test Day, both marques have looked to have the pace required to win Le Mans. In a Balance of Performance world, and with the politics that come with it, it may be a smokescreen. There are rumours that only Porsche and Ford have shown their true hand thus far, though it’s impossible to know. Let’s hope that means next week we’ll see a close race, with the other marques able to go toe-to-toe, rather than a lop-sided affair.

In GTE Am meanwhile, there’s a few notable additions and omissions. The class, as in recent years, is hotly-contested and oozing talent. While we do have the addition of the new Porsche 911 RSR to the mix, what’s not on the entry are any Corvettes, meaning the entire class is made up of Ferrari 488s, Aston Martin Vantages and Porsche 911 RSRs. There is still variety, but maybe not as much as we’re used to. Nevertheless, with a wide array of top pro drivers, budding young talents and well-versed gentlemen drivers, GTE Am promises to be worth following throughout the 24 hours.

Who are the favourites? Despite having its running cut short due to engine damage, the 2017 WEC GTE Am championship-winning No.98 Aston Martin Racing Vantage of Paul Dalla Lana, Pedro Lamy and Mathias Lauda is both in-form after winning Spa and due some good luck at Le Mans after falling short so many times. The old Vantage, let’s not forget, won the GTE Pro race overall last year, so still has life in it. 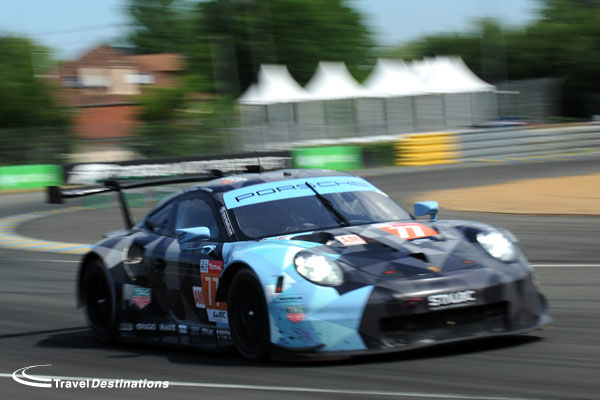 The three Dempsey Proton Porsches too should be considered contenders, the 911 RSR is likely the chassis to have, and all three sets of drivers entered containing a mix of experienced drivers and young hot-shoes. Watch out for Matteo Cairoli (last year’s surprise package), Julien Andlauer (fastest at the test) and the ageless Pat Long, the foundation of this ambitious three-car effort.

Another contender comes in the form of the the Clearwater Racing team, which surprised everyone back in 2017, winning on its debut in the FIA WEC. Matt Griffin, Keita Sawa and Weng Sun Mok work so well as a team, and the crew behind the scenes always turn out an immaculate (chrome liveried!) Ferrari. TF Sport too, could well prove to be a force. The British team, stepping up from a successful 2017 spent in the European Le Mans Series, almost won at Spa in its first-ever appearance; Euan Hankey, Charlie Eastwood and Salih Yoluc combining for a near-perfect drive in the Ardennes. TF Sport has won both big races and championships before, and all three drivers are more than capable of going toe-to-toe with the best in the class. Watch this space!

Last year’s Le Mans winner JMW Motorsport meanwhile, may have a bit of a struggle this time, in its quest to repeat its 2018 feat. This year, its driver line-up isn’t quite as star-studded, though Cooper MacNeil and Jeff Segal both have plenty of Le Mans experience to draw from. That’s not to say after 24 hours, it couldn’t be at the head of the field, but this time around there’s no expectation of a run like last year.

So both GTE Pro and Am promise much for next week’s Le Mans 24 Hours. Close racing and stories throughout each field will unroll before our hours as the clock ticks by. The best place to be is track-side with Travel Destinations so you don’t miss any of the action!