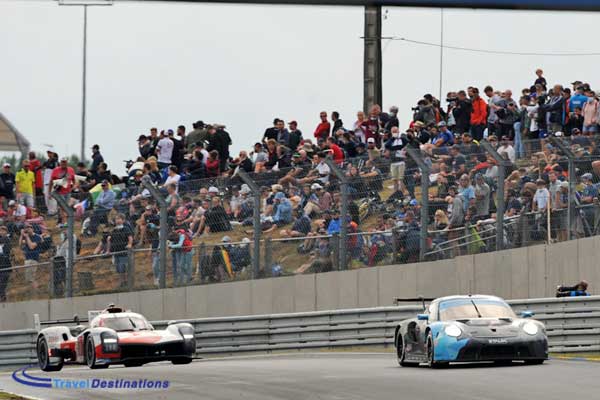 In many ways, the 2021 running of the Le Mans 24 Hours last weekend was a tough one to reflect on. The race took so many twists and turns and kept everyone guessing right until the chequered flag fell. Overall, it was a memorable edition and history will almost certainly be kind to it. It marked the start of a new era for the race, saw at least some fans able to return, and was held with a backdrop of so much future promise.

Congratulations are certainly in order to all the class winners, but the organisation deserves a special mention for delivering a logistically challenging event, in tough circumstances, without any notable hiccups. Now that the dust has had a little time to settle, here’s a look at the highlights from the 89th edition of the ‘World’s Greatest Motor Race’:

After a glance at the results sheet post-race, you’d be fooled into assuming this was an easy ride for Toyota Gazoo Racing. Its new GR010 HYBRIDs claimed a historic 1-2 finish in the first-ever appearance for the Le Mans Hypercar class at the Le Mans 24 Hours, and finished laps ahead of the competition.

However, this was perhaps the toughest challenge for the Japanese marque since Porsche’s LMP1 exit at the end of the 2017 WEC season. Yes, both cars made the finish and crossed the line in formation, but it didn’t feel like a stroll in the park in the same way that its recent victories at La Sarthe have. This is because both GR010s had to overcome significant issues throughout the race.

Toyota’s top brass will be relieved that neither car spent an extended period in the garage during the 24 Hours, but eager for the post-mortem to find out the root cause of the lingering fuel pickup problem that struck both cars. The No. 8 had the toughest time, having to overcome an incident at Turn 2 at the start when Sebastien Buemi was struck by an over-committed Glickenhaus in the wet conditions, as well as two power resets out on track, persistent vibrations and a broken passenger door. The No. 7 though, didn’t emerge from the race unscathed as, like its sister car, it was unable to complete full stints for much of the race, and was forced to pit multiple laps early during each stint for a top-up. It made for a tense atmosphere in the Toyota garage, especially as the other three cars in the class ran reliably and piled on the pressure.

Alpine and Glickenhaus deserve a lot of praise for their respective performances. The former, became the first French marque to finish on the overall podium at Le Mans since Peugeot in 2011, the latter managed to get both cars to the finish, in top five places, with a brand new, somewhat underdeveloped chassis. While neither team had the outright speed to challenge Toyota on this occasion, all three cars in question ran like clockwork, let down only by driver errors that cost them valuable time.

Should both return next year, then the prospect for the 2022 edition is tantalising. With Peugeot joining the fun, it has the potential to be an all-time classic.

Belgian outfit WRT should need no introduction for Travel Destinations regulars. As one of Audi’s premier customer teams, it has achieved countless accolades over the years racing all over the world. It should come as no surprise then, that it didn’t just win LMP2 on its debut Le Mans appearance, it dominated.

The headlines following the race though, focused far more on the frantic finish to the race, than on WRT’s dominance of this stellar field. The final moments of the Le Mans 24 Hours seemingly always produce drama, and this year was no exception. WRT’s No. 41 ORECA, on its way to head a phenomenal, faultless 1-2 finish for WRT, lost all power on the last lap. In a sequence that surely gave the entire Toyota crew PTSD, Yifei Ye was left totally helpless at the Dunlop Esses, and forced to watch the team’s sister No. 31 car blast past to snatch the victory at the death. To make matters worse, the car didn’t finish classified either and was instead categorised as a retirement despite being three minutes from glory.

In what was a cruel twist of fate, Ferdinand Habsburg, Charles Milesi and Robin Frijns were victorious, but not before a thrilling race to the line with the hard-charging No. 28 JOTA ORECA driven by a committed Tom Blomqvist in the final dash to the flag. Seven tenths turned out to be the winning margin, as Frijns was forced to slalom through slower traffic cruising to the line for a photo finish behind the two Toyotas. It was all a little too dramatic, especially for the flag-waver, who had to literally step out of the way in avoidance of the winning ORECA, which was being pushed to the limit until the very end.

LMP2 may have featured just one Ligier in amongst an armada of ORECAs, but for what it lacked in variety as a class, it certainly made up for in thrills and spills.

The GTE classes at Le Mans rarely disappoint, and this was perhaps most evident with the backdrop of the ACO and FIA announcement on Friday that GT3 will replace the current GT platform in the FIA WEC and Le Mans 24 Hours from 2024 onwards.

It was clearly AF Corse’s year, as the Italian marque, for the first time, scored a double class win, and (astonishingly) its maiden GTE Am victory up against stiff competition from the WEC, Asian Le Mans Series, European Le Mans Series and IMSA.

In GTE Pro it turned into a straight fight between the No. 51 AF Corse Ferrari of James Calado, Alessandro Pier Guidi and Come Ledogar and the No. 63 Corvette of Jordan Taylor, Antonio Garcia and Nicky Catsburg. And it would surely have been an even more titanic tussle had a combination of incidents and reliability woes not befallen both team’s sister cars. Where was Porsche in all this? Both factory cars and the two customer cars lacked the outright speed to challenge, with the works 911s also dealt a bad hand during safety car periods early in the race to make matters worse.

The No. 63 tried to keep the pressure on all race long, and finished within a minute of the winning car, unable to overcome the Ferrari drivers who were able to answer back every time the C8.R was armed with a fresh set of tyres and optimum conditions.

It was much the same story in GTE Am. No team was able to match the consistency and outright pace of the No. 83 trio. Francois Perrodo, Nicklas Nielsen and Alessio Rovera were the class of the field and took a convincing win. Aston Martin team TF Sport came closest to preventing a double win for the ‘Prancing Horse’, but a costly puncture during the night and a misfire towards the end of the race robbed Tom Ferrier’s team of what would have been a monumental comeback drive for its No. 33 crew.

Some of the cars will continue to compete in the final rounds of this year’s World Endurance Championship, whilst some will already start to dream of a return to Le Mans in 2022.

You can book with Travel Destinations now for Le Mans 2022. The dates for the race have been confirmed as the 11th & 12th June and all our offers are on sale now. Demand is high as crowds return to racing, so be sure to book early by calling us direct on +44 1707 329988.