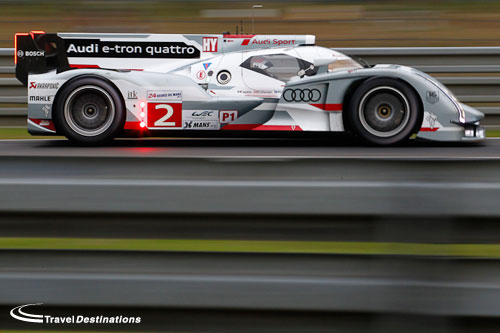 Travel Destinations has teamed up with Michelin Tyre plc to provide a number of benefits for those travelling with us to the Le Mans 24Hrs. Who better to partner with than the tyre supplier to the leading endurance racing teams and which has recorded 15 straight wins.

Book with Travel Destinations to receive exclusive offers on Michelin tyres, maps and guides, as well as Michelin merchandise! Also famous for its Michelin Starred restaurants.

In the first of a number of Le Mans 24Hrs news updates, Michelin provides a report on pre-season testing:
Michelin and four of its partners from the World Endurance Championship have been testing at Motorland Aragon, Spain, to prepare for the 2013 endurance racing season. The cars involved were the Audi e-tron quattro, the Ferrari 458 Italia, the latest HPD-ARX03c and the new Porsche 991. These four machines lapped from Sunday until Tuesday and followed a busy programme established by Michelin. The latter’s development specialists, chemists, analysts and technicians were treated to unsettled weather initially, but conditions gradually improved, allowing the firm to test various types of rubber…

Audi was represented by Benoît Tréluyer, Loïc Duval, Allan McNish, Tom Kristensen and Oliver Jarvis who took turns in three hybrid prototypes. Like every year, Michelin prepares a broad selection of new tyres from which its LMP1 partners choose the ones they want to make up their individual ranges for the season ahead.

Although not present at Aragon, Toyota will also get a chance to choose from the same basic selection.
The other prototype in attendance was the new HPD-ARX03c which will switch from 33/68×18 front tyres to the 36/71x18s used by all the other LMP1 runners.

To accommodate these bigger covers, Honda Performance Development’s engineers have had to make a number of changes to the car’s chassis, suspension geometry, etc. Unfortunately, a technical issue prevented the HPD-ARX03c from covering many laps and it had to leave the test earlier than planned.

In LMGTE, Porsche was in Spain with its new 991 which will officially defend the make’s colours in the FIA World Endurance Championship in 2013. Jörg Bergmeister and Marc Lieb drove the new car which will run on the same-sized Michelin tyres as the 997 GT3 RSR.

Last but not least, Michelotto was present with a Ferrari 458 Italia in the hands of Gimmi Bruni, Toni Vilander and Olivier Beretta.

Audi and Michelin were also in Abu Dhabi earlier in January to test a 2013 specification e-tron quattro at Yas Marina. In order to be able to continue working while Europe’s circuits are in the grip of winter, Audi has scheduled a series of tests in the Middle East before travelling to the USA.