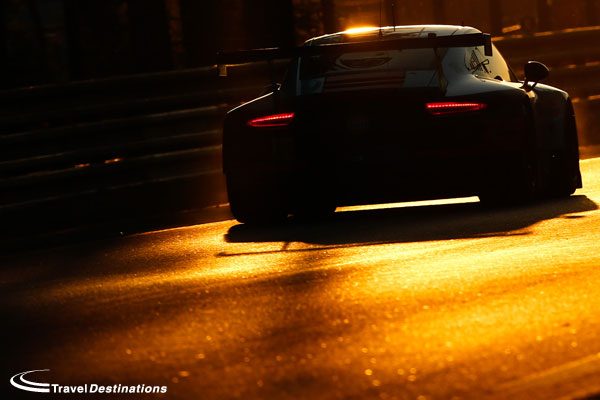 Whilst much of the chatter around the prospects for Le Mans 2018 endurance racing season has focused on the heavily revised FIA WEC calendar, and the comings and goings in the prototype marketplace, there’s an underlying story that deserves every race-goers full attention even before we find out who will be racing for the overall win.

GTE Pro is set to be a barnstormer!  New cars, star drivers, new teams and much more besides. For Le Mans 2018 there’ll be two new factory backed cars to add to the already established Ferrari 488 GTE and Ford GT, both of which still feel like the new kids on the block, by next season, in Pro, they’ll be the oldest cars from the FIA WEC ranks and only the Corvette C7.R is older. The first newcomer is the brand new Aston Martin Vantage GTE. The British marque gave its current car the best send-off possible this year by winning GTE Pro at La Sarthe after a dramatic finish. The new car, which has yet to be formally unveiled, has been out testing over the past month with some of Aston Martin Racing’s factory driver stable. It’ll look very aggressive with hints of the über-Aston Vulcan, sound aggressive thanks to its Mercedes turbo-charged V8 engine, and should be in immediate contention for a good finish at Le Mans if the scale of the upgrades reported by those who have driven it, are to be believed. BMW meanwhile, brings the other new bit of kit to Le Mans 2018, its M8 GTE, which sees the Bavarian marque return to the French endurance classic for the first time since 2011. Last time round, the world-famous Schnitzer team ran the programme – which saw two M3 GT2s take on the race – this time, it’s MTEK, who move over from DTM competition to take on the full WEC, and of course Le Mans 24 Hours.  The team has been practicing – hard! MTEK have had a full pit set-up to play with, with constant pit-stop and problem solving drills, for months, months before receiving their first M8! The new M8 is a looker, and under the hood is set to stun! It features a c.500bhp twin-turbo four-litre V8, with a cylinder block and cylinder head identical to the road going 8 series engine. It’s a light car too, weighing in at just under 2,700 pounds, the reduction in weight achieved through the extensive use of ultra-light CFRP components. BMW has never won at Le Mans in the GTE era, in fact the last BMW to win a class at the race was back when it won overall in 1999! The MTEK crew will be looking to right that in 2018.

Having BMW along for the ride at Le Mans 2018 means that at the very least, GTE Pro is slated to feature two car factory teams from Ferrari, Porsche, Aston Martin, Ford, Corvette and BMW, that’s without the potential for Ford to bring its other two IMSA-regular GTs, a third Porsche 911 RSR joining the fight plus the likelihood of a third Ferrari from the IMSA ranks too. Of the current crop of runners, there’s plenty to look forward to also. The 2017 Porsche 911 RSR is back for its second season; its screaming engine note, the team’s selection of world class drivers and year of running under its belt could well see the German team take its first GTE Pro win since 2013. Gianmaria Bruni will surely feature, a key signing from Ferrari last season alongside established GT racing superstar Laurens Vanthoor – with a number of the marque’s LMP1 refugees also likely to be involved including Britain’s Nick Tandy. Ferrari’s rapid Brits will be on hand too with James Calado and Sam Bird both on race winning form in the super rapid turbocharged 488 GTEs. Then there’s Corvette Racing, the Pratt and Miller-run American crew, which are always a fan-favourite, will race with the C7.R for the final time. The new car is quietly in development, and could well be a radical change for the American manufacturer. Fans will be urged to enjoy the C7.R one last time though, the attention firmly on its Le Mans and IMSA-winning GTE monster, which will be gunning for its second GTE Pro class title.

Being confident beforehand though, will be hard. This year’s new ‘Automated Balance of Performance’, with Le Mans-specific balancing proved a raging success, with a close race up and down the field in the GTE ranks, all the marques able to gun for podium spots. Gone it seems, are the days when the BoP ruined teams’ chances before the on-track action started on the Wednesday, and behind us, is the 2016 Le Mans 24 Hours, where Ford dominated the field after revealing its true hand in Qualifying.

And all of that is before we look to GTE Am where a gaggle of new cars are set to feature, the 2017 Porsche 911 RSR, and the Ford GT are now eligible for the Pro-Am class in 2018 with Porsche sales already confirmed.

Le Mans 2018 will be loud, it’ll be close and it should be thrilling for 24 straight hours. The GTE Pro race at Le Mans in 2018 could be one of those ‘I was there’ contests, which will be looked at as one of classic bouts in a golden era for sportscars.