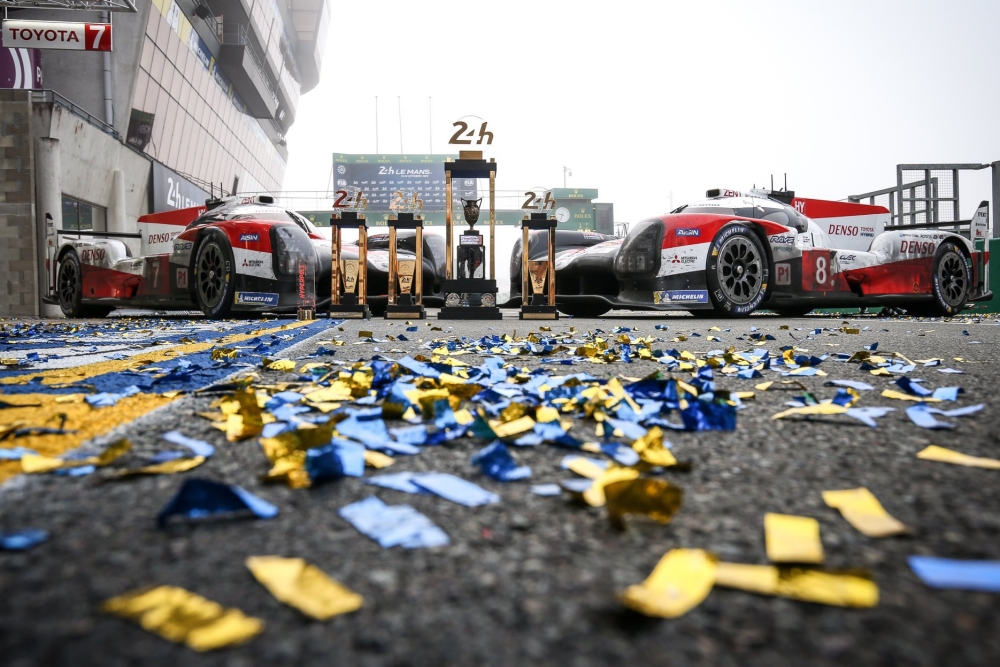 Well folks, the 2020 Le Mans 24 Hours went ahead, and it proved to be a huge success. The ACO deserves high praise for persevering and delivering an event that many thought wouldn’t happen at various points this year.

It was an event that featured much more than just a race too. It provided a look at the future, with news emerging about future regulations, calendars, which Travel Destinations took a look at back on Friday.

So with the 88th edition in the books, let’s revisit some of the key takeaways from the race itself:

Thanks for everything TS050, it’s been quite a ride

The LMP1 Hybrid era is now over, and it ended with Toyota scoring its third straight win at Le Mans with the No. 8 TS050 HYBRID. What a ride it’s been, an eight year roller-coaster that started back in 2012 with Audi Sport and Toyota pushing the boundaries at the inception of the FIA WEC and sparked off a ‘Golden Age’ for top level sportscars that fans will never forget.

Toyota’s commitment to endurance racing has been admirable through the years, and now it has been rewarded for its efforts with three Le Mans wins.

While it can be argued that Toyota’s victories have come against lesser competition, since the departure of Audi and Porsche, it can only beat the competition in front of it. It should also be applauded for sticking with the sport through peaks and troughs.

As a race, LMP1 this year was the most entertaining it’s been since Porsche withdrew from the class after 2019. Rebellion, on pace, were there or thereabouts with the TS050s and during the race actually managed to set the fastest lap with its No. 1 R-13.

Unfortunately, Rebellion didn’t risk pushing the limits of its cars for the entire race, and instead opted to run at a pace which didn’t put too much stress on the car’s components in order to get both cars to the finish.

In some ways, this worked, as neither of Toyota’s TS050 HYBRIDs had a clean race, and had the winning No. 8 suffered any further issues in the second half after its brake duct issue early in the race, then Rebellion would have been ready and waiting to steal the victory.

But fortunately for Toyota, the No. 8 held out and won by multiple laps. Sebastien Buemi, Brendon Hartley and Kazuki Nakajima, as you would expect, didn’t put a foot wrong and brought the car home, securing another big win for the Japanese marque.

Their teammates in the No. 7 must wonder what they have done to deserve such rotten luck, as Mike Conway, Kamui Kobayashi and Jose Maria Lopez have come close so many times now, and this year more than ever they looked a sure bet to win.

With the No. 8 in trouble early with a puncture and brake duct fault, the No. 7 led the charge until nightfall, when a turbo-charger problem forced lengthy repairs that dropped the car outside the top three. They were lucky to get on the podium too; had Louis Deletraz not had an off at Indianapolis in the final hour in the No. 3 Rebellion and been forced into the pits for a change of front and rear bodywork then they would have finished fourth.

They’ll have to try again next year, when Toyota returns to Le Mans with its brand new Le Mans Hypercar….

The 2020 Le Mans 24 Hours was a huge success for Aston Martin, its Vantage AMR taking wins in the GTE Pro and Am classes, wrapping up the GTE Pro Manufacturers’ World Championship in the process. Was it the brand’s best ever Le Mans result? You could argue the 1959 overall win was more significant… But nevertheless, this was a truly momentous day for Aston Martin, and will come as a real positive for everyone at Prodrive (which runs the team) and the automotive arm of the business after a tough year financially.

Alex Lynn, Maxime Martin and Harry Tincknell won GTE Pro in the No. 97, and proved to be the class of the field after the opening hours. This year it quickly became a head-to-head battle between AF Corse and Aston Martin Racing after Porsche’s two 911 RSR 19s were quickly exposed as lacking pace and reliability.

In the end Aston Martin took the win, after a remarkably consistent and fault-free performance over the No. 51 Ferrari 488 GTE EVO of James Calado, Alessandro Pier Guidi and Daniel Serra after a performance than on any other year may have been easily good enough to take the victory.

One of the most astonishing factors that led to victory for the No. 97 was how well the trio managed the car and conditions. All three found a way to extract race-winning pace while preserving the car, to the point where they could go the entire race without a brake change, something that would have been unthinkable a few years ago.

TF Sport meanwhile, delivered a similarly emphatic win in GTE Am, becoming the first Aston Martin customer team to get a class win at Le Mans in the modern era. Tom Ferrier’s team ran like clockwork, and Salih Yoluc, Jonny Adam and Charlie Eastwood all putting in the best drives of their careers to date.

GTE Am was somewhat of a lottery early in the race, as the varying strategies surrounding the use of gentlemen drivers caused a cycle of various contenders rising and falling up and down the order. It wasn’t until the night hours set in that the real contenders emerged, TF Sport’s Aston looking like a solid bet for the win along with the other Vantage AMR in the class from Aston Martin Racing. But reliability struck the AMR crew and eliminated them from contention before sunrise, leaving TF to fend off the challengers from Porsche and Ferrari solo. TF, to its credit, pushed on and produced a textbook faultless run.

In the end the battle for second proved to be the most thrilling, as a late safety car bunched up the field and produced a titanic scrap between three young rising stars in Nicklass Nielsen, Matteo Cairoli and Matt Campbell for the final two spots on the podium. It would be Campbell in the No. 77 Proton Porsche who would lead Nielsen in the No. 83 AF Corse Ferrari home for silverware behind the TF Aston.

The race for LMP2 glory was an unusual one, a real war of attrition, something we don’t often see in the current era, with spec prototypes that have proven to be on the whole bullet-proof since their debut season in 2017.

Racing Team Nederland’s ORECA, the Signatech Alpine, United’s No. 32 ORECA, both DragonSpeed’s ORECAs, the High Class Racing 07, both of the G-Drive Racing Aurus entries, Eurointernational and Inter Europol’s Ligier, Nielsen’s ORECA, the Jackie Chan DC Racing ORECA and the Cool Racing ORECA all suffered notable failures. There were so many issues, for so many teams, that no lead or strong position felt safe.

United Autosports however, bucked the trend and managed to get the No. 22 of Paul Di Resta, Phil Hanson and Filipe Albuquerque home without any issues, continuing its winning streak in the LMP2 classes of the ELMS and FIA WEC this year alive.

“To win the legendary Le Mans 24 Hours, on only our fourth appearance, and clinch the FIA LMP2 World Endurance Championship title for Drivers and Teams on our very first attempt with one race still to run, is just amazing,” a jubliant Zak Brown told Travel Destinations.

“Richard [Dean] (United co-owner) has built such a great team over the past 10 years since United started racing. Full credit to Phil, Filipe and Paul plus the entire team for earning United an awesome result.”

It comes as no surprise after studying the form pre-race, but it is nevertheless a remarkable achievement, especially considering the team had never raced the ORECA chassis (with its Le Mans joker aero package) at Le Mans before, up against a field of world-class teams and drivers.