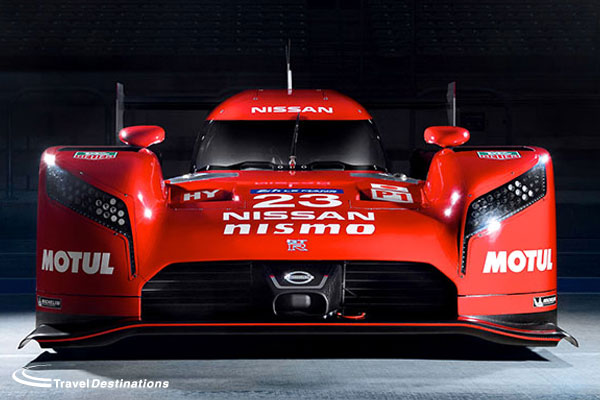 Nissan has declared itself ready to take on the world’s best sports car manufacturers after revealing a glimpse of its Le Mans challenger, the Nissan GT-R LM NISMO during the commercial break for Super Bowl XLIX.

Last year’s Super Bowl was the most watched television programme in US television history with over 110 million viewers. The 2015 game was therefore the perfect opportunity for Nissan’s “With Dad” commercial (view at www.withdad.com) to air for the first time, revealing the much-anticipated Nissan GT-R LM NISMO, the car that will take on the best in the world in the race to glory at the Le Mans 24 Hours.

In a bold move, the Japanese manufacturer has interpreted the sport’s technical regulations in an innovative way, producing a front-engined, front wheel drive car that is powered by a V6 3-litre twin turbo petrol engine and a kinetic energy recovery system.

“It gave us great pride to reveal the Nissan GT-R LM NISMO during the Super Bowl,” said Roel de Vries, Global Head of Marketing and Brand Strategy at Nissan. “The combination of the Super Bowl and the Le Mans 24 Hours, two of the most watched sporting events in the world, presented us with a unique opportunity to showcase our most ambitious motorsport programme in recent times.

“The GT-R is our flagship road car,” he continued. “This, the ultimate GT-R, continues a sporting bloodline that goes back three decades with NISMO, the motorsport and performance arm of Nissan. Le Mans drives innovation so success on the track will lead to greater innovation in our road car range. We are the new kids at Le Mans; our opponents are the best in the world but we are ready.”

The new car will contest the LM P1 class of the FIA World Endurance Championship, the highest category in world sports car racing. Starting at Silverstone, UK on 12 April the series travels around the world to Spa in Belgium, onto the Le Mans 24 Hours and Germany’s Nurburgring, before going global with races in the US, Japan, China and the Middle East.

The FIA World Endurance Championship is the ultimate proving ground for automotive companies as technological gains on the track can carry through to road cars. Racing car engineers are facing the same challenges as road car engineers as the spotlight falls on energy efficiency. With more technical freedom than Formula 1, the LM P1 engineers have ample opportunity to innovate.

“This is innovation that excites,” said Shoichi Miyatani, President of NISMO. “Sustainability is at the top of our agenda and the technical regulations for Le Mans give us the freedom to pursue new ideas in this area. Our record at Le Mans is third place overall so we have unfinished business there. We want to win and we have the knowledge to do that for our customers, our employees and our fans. The competition is exceptionally strong and we are excited by the challenge.”

“Our LM P1 programme makes the connection between NISMO on the road and NISMO on the track, showcasing our brand DNA to a global audience,” explained Darren Cox, Global Head of Brand, Marketing & Sales, NISMO. “We are taking motorsport to the masses, telling tales of technical innovation but also human stories via all of the exciting communications channels that are open to us now. We will innovate off the track as well as on it so you can be assured that this is just the beginning of the story.”

The intensive test programme for the Nissan GT-R LM NISMO that began in Arizona last year continues in the US. Nissan’s full LM P1 driver line-up will be revealed soon. Swiss watchmaker TAG Heuer is the Official Watch Partner and Official Timekeeping Partner. The LM P1 drivers will all wear TAG Heuer watches and the partnership will be activated globally by both parties, with several exciting developments to be announced in the coming months.

Motul is the Official Lubricants Partner for the programme, working closely with NISMO’s engine department to develop high-performance products to enhance competitiveness and efficiency. Motul has enjoyed a long-standing relationship with NISMO over the past two decades and this natural expansion into the LM P1 programme comes soon after the Super GT Championship victory for the iconic #23 MOTUL AUTECH GT-R.

The LM P1 programme will use tyres supplied by Michelin. The French manufacturer has developed tyres especially for the Nissan GT-R LM NISMO and been an integral part of the car’s extensive test programme.
Taking on the Best in the World

In 2015 Nissan will enter the Nissan GT-R LM NISMO into the full FIA World Endurance Championship, marking a return to the premier class at the Le Mans 24 Hours for the Japanese manufacturer. Nissan will challenge for victory with an innovative approach and with a truly exciting product that represents the next generation of the Nissan GT-R.

“We are excited to be going head-to-head with the best sports car racing manufacturers in the world,” commented Roel de Vries, Global Head of Marketing and Brand Strategy at Nissan. “LM P1 is a proving ground for technological innovation, especially when it comes to the power sources of the future. In 2014 three different manufacturers using three different powertrain combinations won races. If you ever needed proof that LM P1 is the sharp end, this is it.”

Nissan might have been absent from the top class at Le Mans for 16 years but the company has been very active in other categories, building an envied sports car ladder that runs from the new LM P3 category, through a world-beating engine supply programme in LM P2, and onto the top step to LM P1 via the ACO’s clever ‘Garage 56’ programme, a unique class at Le Mans reserved for innovative technology that falls outside of the normal regulations

“Our LM P3 engine supply programme is a new venture for us but if it is nearly as successful as our LM P2 programme we will be very proud of our achievements, said Shoichi Miyatani, President of NISMO. “Our LM P2 engine has powered teams to championship victories and class wins at Le Mans. Our Garage 56 projects have led us to LM P1 and the innovations that we have employed. Enormous lessons were learned from the very heavy hybridisation of the Nissan ZEOD RC and we’ve carried those lessons over into this project.”

LM P1 cars are the most extreme sports cars in racing today so, for Nissan and NISMO, the opportunity to innovate at the highest level could not be missed. “These cars represent the pinnacle of current racing technology: huge energy recovery systems, super fuel-efficient engines and wild aerodynamics, creating extremely fast cars for their weight and endurance, said Nissan’s LM P1 Team Principal, Ben Bowlby. “These are 24-hour racing cars that cover practically a whole Formula One season in one Le Mans race. It’s a very different challenge to F1 and much more relevant to what’s going on in road cars. If you drive from say London to Edinburgh you expect the car to get through the miles and be fast, stable, comfortable and safe and provide the handling and grip you might need if you have to come off the motorway and take some back roads, that’s the sort of challenge that Le Mans represents. It’s all about having a fast, efficient and safe car.”

The FIA World Endurance Championship provides manufacturers with the opportunity to develop new technologies for its road car range. With energy-efficiency being the key, there is no greater test for technology than a 24-hour endurance race where the gap between first and second place can be a matter of seconds after 24 hours of racing.

“It is firmly our intention that technology developed on the LM P1 car will transfer to Nissan road cars,” said de Vries. “We are developing ultra-efficient V6 twin turbo of the configuration and lineage of the Nissan GT-R. This is a more efficient but equally powerful direct injection solution so it’s a potential forerunner to future GT-R engines. Also the kinetic energy recovery technology that we’re developing through racing could indeed have potential for future road car applications.”

Nissan is a global car manufacturer so it makes sense that the LM P1 programme is a truly global project.

“The car was built in the US and will complete its initial test programme there before moving to Europe for the start of the FIA World Endurance Championship season,” explained Miyatani. “Engineers and mechanics from Japan has been fully integrated into the programme and, just like any race team nowadays, we have selected our personnel from all over the world.”

Taking on the best in the world and competing to win is a daunting task for Nissan. The competition is well-established and the racing in the FIA World Endurance Championship is ultra-close but this is a challenge that Nissan has accepted and the Nissan NISMO team will fight to get onto the top step of the podium like it has never fought before.

“All I want is to be sure that the team did its best,” said Darren Cox, Global Head of Brand, Marketing & Sales, NISMO. “What we’re aiming for is to have executed to the best of our ability and that’s what we’re focusing on. There’s a lot we can’t control, for example, we don’t know where our rivals are going to be when we get to the first race. If we’ve all done our best I’ll be delighted and good results will come if we continue to do our best. So our goals and targets are simply to do our best. I think that, as a group, our best will lead to some great results.”

Michelin has been nominated as the tyre partner for Nissan’s LM P1 endurance racing programme, the Nissan GT-R LM NISMO will race on Michelin 31/71-16 (front) and 20/71-16 (rear) tyres.

“We are very proud to have been chosen by Nissan to develop tyres for its LM P1 programme,” says Michelin Motorsport Director Pascal Couasnon “After our successful associations during Nissan’s 2012 and 2014 ‘Garage 56’ projects, as well as our success together in Japan’s Super GT championship which has seen us claim three titles in four years, Michelin stood out as the natural tyre partner for Nissan’s latest project. The Nissan GT-R LM NISMO is a fantastic car. It will serve as a valuable laboratory for the future but will also make high demands on our tyres from the word go. The development of tyres for this car will be a challenge and we at Michelin didn’t hesitate to rise to it.”

“LM P1 confronts manufacturers with a huge number of technical challenges,” said Darren Cox, Global Head of Brand, Marketing & Sales, NISMO. “It was therefore vital that we have a tyre partner who is willing to push the boundaries with us so that we can innovate to the extreme with the Nissan GT-R LM NISMO. Michelin was a valued partner to us during our ‘Garage 56’ projects so we are delighted to be working with them on our LM P1 programme.”