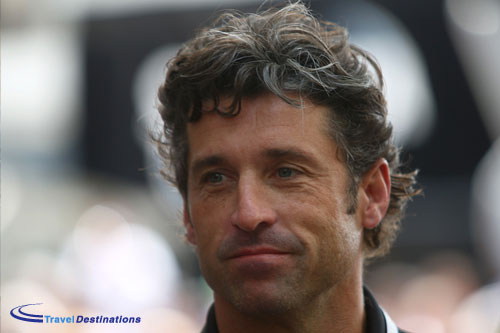 Hollywood and the 24 Hours of Le Mans have a relationship that stretches back more than 40 years.

The late Steve McQueen starred in the 1971 film titled, Le Mans, which utilized footage from the 1970 race at the Circuit de La Sarthe, with sports car legends Jo Siffert and Brian Redman driving the car McQueen is depicted as racing in the film.

McQueen clearly had an affection for motorsports, as did Paul Newman, another Hollywood superstar. Newman competed in the 1979 24 Hours of Le Mans in a Dick Barbour Racing Porsche alongside co-drivers Rolf Stommelen and Dick Barbour. Newman and his teammates finished second overall and first in class, an impressive performance in what would be Newman’s only attempt at Le Mans.

Today’s resident Hollywood motorsports enthusiast is Patrick Dempsey, star of “Grey’s Anatomy” and many popular films. Dempsey has been an active participant in sports car racing for nearly a decade, racing in both the GRAND-AM Rolex Sports Car Series and the American Le Mans Series. This weekend, he will join longtime co-driver and motorsports business partner Joe Foster and Porsche factory driver Patrick Long in the No. 77 Dempsey Del Piero-Proton Porsche 911 GT3 RSR in the GTE Am class. The trio is the only all-American driver lineup in the 90th Anniversary 24 Hours of Le Mans.

And true to his Hollywood roots, cameras will be rolling throughout for a four-part documentary series to air later this summer on Discovery’s Velocity channel in the USA.

Dempsey’s chances of doing well will be enhanced by the addition of two-time 24 Hours of Le Mans winner and five-time ALMS champion Long to the driver lineup. The Porsche factory driver turned the third-fastest lap in the GTE Am class at the one-day Le Mans pre-test on 9th June, and likes what he sees in his first time as teammates with Dempsey and Foster. “The pre-test here wasn’t the easiest day with mixed conditions and a lot of rain, so we didn’t get a ton of track time, but both of them got right up to speed,” Long said. “Honestly, I think we’ve taken a lot of the fellow competitors by surprise.

“A lot of guys have come up to me that I’ve raced against or with in the past, and they didn’t have us as the favorites in the class or one of the favorites. Seeing Joe and Patrick’s pace in the pre-test, they’ve sort of adjusted their odds.”

Dempsey and the team have some momentum on their side heading to Le Mans. He came within a lap of his first career victory in the ALMS GTC class alongside co-driver Andy Lally in the No. 27 Tully’s Coffee Porsche 911 GT3 Cup before finishing second.

That performance was a shot in the arm for the team, which raced in the ALMS P2 class last year before switching to a two-car Porsche effort in GTC shortly before the start of the 2013 season.

“Definitely the program this year has taken a step up in terms of our relationship with Porsche and ALMS and at Le Mans,” said Foster. “We had a pole position [at the Mobil 1 Twelve Hours of Sebring Fueled by Fresh From Florida in March] and both cars led for quite a while at Mazda Raceway Laguna Seca.

“Patrick (Dempsey) did a fantastic job early in the race coming back from two laps down and it gave Andy a chance to win. We actually started the last lap in the lead and got helped off the road by a prototype, but it’s been a great year.”

If things go according to plan this weekend, it could be an even greater year for Dempsey and the team. But regardless of performance, Dempsey cherishes the Le Mans experience.

“It’s an incredible honor to be over here, to be invited to race in this event,” he said. “I think anybody who’s a road racer wants to race here. Having done it in the past and coming back and doing it with an all-American driver lineup with Patrick Long and Joe Foster and with a great team at Dempsey Del Piero-Proton, it’s a tremendous honor.

“It means everything to us. It’s humbling, it’s exciting, it’s inspirational and it’s so moving to be a part of this event. It’s a dream come true to come back here.”

The TV crew filming Patrick Dempsey at Le Mans 2013 are staying at the Travel Destinations Flexotel Village in the centre of the circuit.