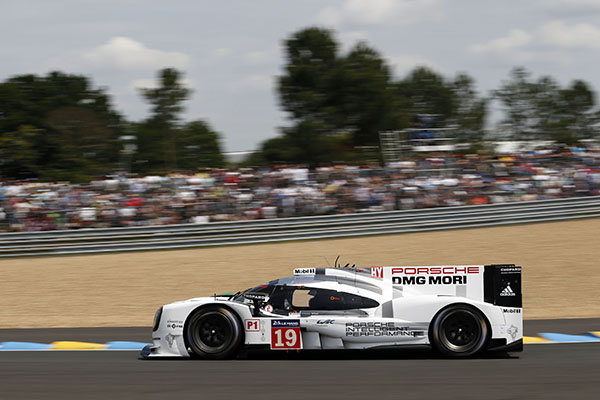 Porsche have won the 83rd running of the Le Mans 24 Hours. It is a record 17th overall win for the German manufacturer, but their first since 1998. The No. 19 Porsche 919 Hybrid, driven by Nick Tandy, Earl Bamber and Nico Hulkenberg came home first after 24 hours of intense racing, sparking huge celebrations in the pit lane and amongst a crowd of more than 263,000 enthralled spectators.

Le Mans 2015 always looked like it would be a head to head between Audi and Porsche. Audi were the reigning champions and had won 9 out of the last 10 Le Mans races. Porsche only returned to the top flight of endurance racing last year. They had shown their pace in the first two rounds of the FIA World Endurance Championship (FIA WEC) but had been let down by reliability problems. In practice and qualifying Porsche showed that they had the faster car. They set records in qualifying for pole position and claiming a 1-2-3 for the start. Audi were never slow, but sat ominously behind the Porsches like a stalking predator. The other factory teams, Toyota and Nissan were never able to keep up with the leading cars.

In reality the race didn’t go as everyone expected. The Porsches got away well but didn’t have the pace to pull away from the Audis. In fact regular safety cars meant that as early as the second hour the No. 7 Audi was able to catch and pass the Porsches to take the overall lead. Indeed it was Andre Lotterer in that Audi that set the overall quickest lap of the race; another Le Mans record.

So Porsche weren’t the fastest and it turned out the Audi weren’t the most reliable either. Shortly after taking the lead the No. 7 Audi had to pit out of sequence with a puncture and the lead was handed back. Worse was to befall the No. 8 Audi, when it didn’t brake entering a slow zone (due to signal confusion) and had to swerve to avoid slowing vehicles in front. As a result Duval lost control of the car and the Audi crashed head on in to an Armco barrier. It is a credit to Audi that not only was Duval not injured, but that he was able to return the damaged car to the pits, and that in less than 5 minutes it had rejoined the race under the safety car still fixing the barriers it had damaged. However the advantage had been handed back to Porsche.

As darkness fell, the action continued and there was a fascinating interchange between Audi and Porsche, with neither being able to break free from the other. As one car pitted, the other took the lead, only to give the lead back at the next pit stop. It wasn’t until daylight was returning that Porsche started to gain an advantage. The No. 7 Audi had always been the quickest of the Audis, but they dropped back when inexplicably they lost their engine cover on the track and had to return to the garage for bodywork repairs. Although the car rejoined this was a problem that was never really resolved and continued to cause concern in to the latter part of the race. It was crucial time lost. The No. 19 Porsche managed to grow a gap at around 8am when a safety car split the LMP1 pack. This enabled Hulkenberg to gain a lap on its nearest rivals. The No. 9 Audi was hanging on, but Webber in the No. 17 Porsche was with them and managed to take second, proving another barrier between Audi and the lead.

Pressure was building on Audi to break the Porsche stranglehold, but mistakes began to be made. Fassler caught the wrath of the stewards after trying to unlap himself under yellow flags. It was a desperate move caused by frustration but it only gained a drive through penalty and any gains the car had made were instantly lost.

As the race entered its final stages the No. 19 Porsche continued to lap in the 3 minutes 20 seconds area and it was the Audis that broke under the strain. Each of the Audis in turn suffered issues, including a return of the loose engine cover for the No. 7 car and their challenge was done. It was left for the No. 19 Porsche to lead home the sister No. 17 car relatively untroubled with a laps margin between them to enable the Porsche team to enjoy a memorable victory.

Despite having 2 rookie drivers and one parachuted in from Formula 1, the No. 19 car fully deserved the win. In fact it was the British driver Nick Tandy and New Zealander Earl Bamber who should take the plaudits, because although Nico Hulkenberg brought the car across the line, it was the impressive times set by his teammates through the night that set up this impressive win. In the LMP2 class the victory went to the Nissan powered Oreca of KCMG. They were challenged at various times by G-Drive racing and a late charge by Jota Sport, but in truth they lead the field for 90% of the race and fully deserved their win.

The GTE Pro battle was intense throughout. Whilst the Porsches never had the speed in this class, there was a great three way battle between Aston Martin, Ferrari and Corvette that at times saw cars three abreast across the track. Aston Martin looked to have the power, but accidents and reliability issues curtailed their challenge. Going in to the morning the No. 51 AF Corse Ferrari was slugging it out with the sole remaining No. 64 Corvette. It looked like the Italian team would hold off the American challenge, when disaster struck and the experienced Vilander had to bring the Ferrari back in to the garage with gearbox issues. It was heartbreak for the AF Corse team, but it meant that the Corvette team that saw their sister car crash out in qualifying, stayed the distance to take a memorable win. All the more important as their major rivals Ford have taken the chance to announce a return to Le Mans for 2016.

Even more heartbreaking was the story of the GTE Am race. The No. 98 Aston Martin had qualified quickest and had led the race by some distance going in to the last hour. Then, with Paul Dalla Lana at the wheel and the podium step seemingly guaranteed, the car inexplicably careered into the barriers at the Ford Chicane. It was the only mistake made by the team all week but it ended their race immediately. It was left then to the No. 72 SMP Racing Ferrari to almost apologetically take the class win. They had overcome their own battles to cross the line, but even they must have felt sorry for the Aston Martin Racing team.

The Le Mans 24 Hours 2015 was a great race. Full of twists and turns, broken records and broken hearts. Porsche were deserved winners breaking the dominance of Audi over recent years.

A more detailed report of the race incidents will appear on this website later in the week. In the mean time….