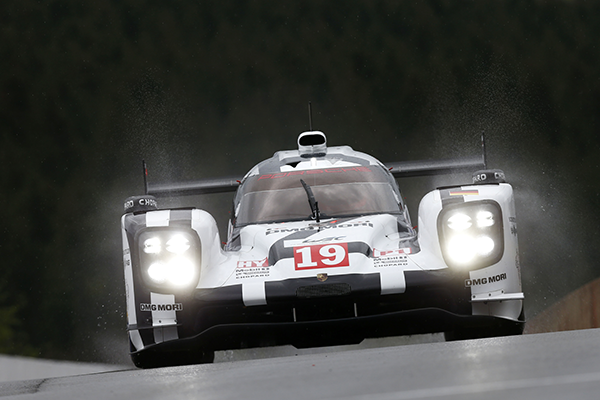 In the end it was same again at Spa-Francorchamps, as despite the challengers getting close, Audi managed to prevail and take the win to record their second FIA World Endurance Championship win of the season. Porsche showed that they have the quicker car. Having locked out the first 3 places on the grid, the Porsche 919s were quickly away and building a gap as the Audis fought with Toyota for position behind. This was the closest that Toyota would be to the lead as both their cars lacked the pace to challenge at the front. This must be a concern for the Japanese team going in to Le Mans next month. Porsche lost cars early as Nick Tandy’s 919 had a collision with a Porsche 911 whilst making their way through traffic. The resultant off in to the barriers and the repairs that followed ended both cars challenge on the day. The Pole-sitting No. 17 Porsche 919 was hampered when Brendon Hartley outbraked himself at the bus-stop chicane and found a route back to the track by driving through a marshal’s post. Not only was this not the quickest route through the complex, but the subsequent stop-go penalty left them with too much ground to make up.

After these own goals for Porsche it was left to the No 18 car to continue the fight at the front. The longer the race went on the closer that Audi got to the leader. Audi had their own issues too, with the No. 8 car falling foul of electrical gremlins, but the other cars stayed in contention until the end.

Ultimately it became a battle of strategy. Whilst the Porsche was clearly fastest on the straights, the Audi would gain some time through the corners so something else had to give. Ultimately it was tyres. The No. 7 Audi somehow managed to maintain decent pace whilst running 2 and half stints on the same tyres. The Porsches really struggled when they tried to double stint their tyres and ultimately this cost them the win. Coming in to the last third of the race Marc Lieb’s Porsche was just in front of Benoit Treluyer’s Audi, with both constantly winding their way through traffic. Following a few laps of near passes, good defence and some amazing manoeuvres through the rest of the field, the Audi finally managed to pass the Porsche. It was a lead they were not to give up.

As the final pit-stops played out it became clear that both cars would need to stop for fuel with just minutes to go. However, if Audi had changed tyres as well, they may have let the Porsche back pass. As it was the calm head that is Leena Gade on Audi’s pit wall made the call not to change rubber and so the Audi maintained the lead. Despite staying out for about 60 laps on one set of tyres the Audi managed to maintain pace and stay in front to record another win. The LMP2 class was dominated by the British Jota Sport team. Participating in this race as part of their preparation for Le Mans (they are currently racing in the ELMS), they would have led from start to finish were it not for a penalty imposed for jumping the start line. Ultimately it didn’t affect the outcome as the Jota team made up time and re-took the lead before the half way point. The class winner at Silverstone was G-Drive racing, but this car succumbed to an electrical fault and didn’t feature at the end.

Another British team to leave Spa smiling were Aston Martin. They managed to record a double win by taking victory in both LM GTE classes. The No. 99 car emerged victorious in the GTE Pro class after leading from the front. Their closest challenger was the Ferrari of AF Corse who looked to challenge near the end, before a loose tyre in the pit lane incurred a stop-go penalty. In the LMGTE Am class the No. 98 Aston Martin Vantage V8 had few challengers. They were strong throughout the race and eventually crossed the line to win a full lap ahead of the 2nd place Ferrari.

This was an engrossing race, with twists and turns throughout. Porsche will think of this as a missed opportunity but Toyota will be more concerned about their lack of pace. Audi however, will be more than happy that the best their challengers could offer was still not quite good enough. More than 50,000 fans at Spa over the weekend were fully entertained. We now move on to the big one, with little time for the teams to recover before Le Mans.