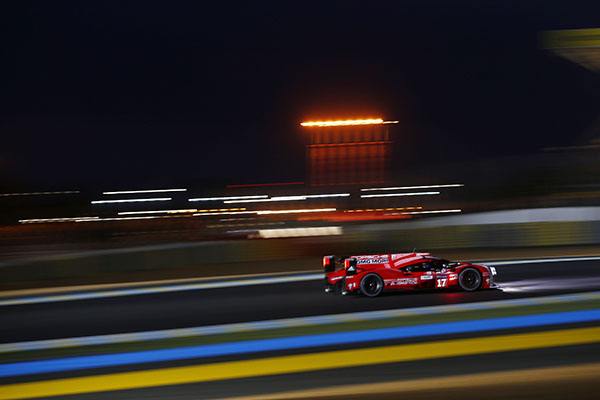 Following a disrupted and damp last practice session, all cars took to the track for Wednesday night’s first qualifying session, keen to impress. With the weather forecast for Thursday’s two qualifying sessions uncertain, all the teams wanted to claim a provisional pole. Porsche managed to do this in some style and set a new qualifying record for this Le Mans circuit in the process. With a strong performance, the three Porsche 919 Hybrids finished first, second and third in the first of three qualifying sessions for the Le Mans 24 Hours. The best overall lap time for the field of 56 cars was achieved by Neel Jani, who lapped the 13.629 kilometre long circuit in 3:16.887 minutes. The Swiss has now established a new qualifying record for the current track length by beating Peugeot’s pole position time from 2008 (3:18.513 min). Jani shares car number 18 with Romain Dumas (FR) and Marc Lieb (GER). Timo Bernhard (GER) achieved the second fastest time today, which was also good enough to beat the old record. Just like Jani, he was in the car as soon as qualifying began before his teammates Brendon Hartley (NZ) and Mark Webber (AUS) took over the number 17 prototype later in the session. For the third trio, with the Le Mans rookies Earl Bamber (NZ) and Nico Hülkenberg (GER) sharing car number 19 with Nick Tandy (GB), it was the Britain who did their fastest lap with the around 1,000 HP hybrid race car in 3:19.297 minutes to come third.

The three Audi cars followed on from the Porsches, with the 2 Toyotas behind the Audis. The other factory team, Nissan, struggled for pace and were swallowed up by the LMP2 field. Le Mans has three qualifying sessions that are held with each of them lasting for two hours. The best lap time achieved in these six hours is the one that decides each car’s grid position. Because the weather conditions are currently tending to be changeable, it is not clear what Wednesday’s time sheets from the dry session may be worth in terms of grid positions.

It is clear from this one session that Porsche have the quickest car at Le Mans in these conditions. The times set in qualifying may indeed be enough to secure pole position for Saturday’s race. However, Le Mans is an endurance race and not a sprint. Having the fastest car is not enough at Le Mans. You only have to look to last year’s result, where the Toyota qualified on pole, yet Audi secured the victory.

If nothing else, the results form the qualifying session on Wednesday show that the race is going to be another good one.