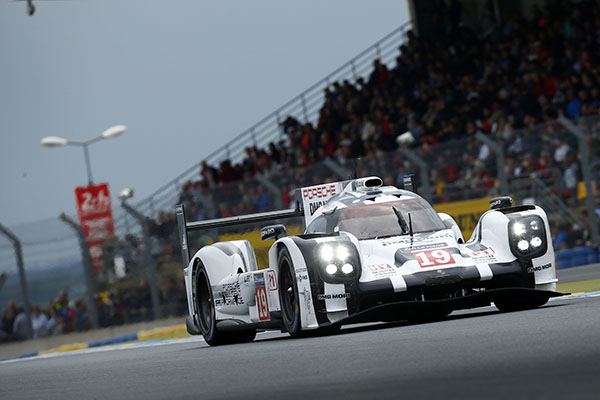 On Wednesday night the No. 19 Porsche 919 Hybrid, driven by Neel  Jani, set a record breaking qualifying lap (for this Le Mans circuit configuration) of 3 minutes, 16.887 seconds. Thursday’s two qualifying sessions proved to be stop-start affairs in warm and humid conditions, that meant the this incredible time could not be challenged. This means the Porsche driven by Jani, Dumas and Lieb, will start the 83rd Le Mans 24 Hours from pole position. They will be joined on the front row by the sister No.17 car and followed in third by the other sibling, the No. 18 Porsche 919 hybrid. The second qualifying session began in overcast, stormy weather at 19:00hrs on a dry track, but it was upset by several incidents. Four stoppages upset the original planned schedule for all the teams. Among the improvements early on was the No. 19 Porsche, as it beat its Wednesday’s time with a lap in 3m18.862sec, but this did not change the previous day’s hierarchy. The first stoppage was at 19:40hrs because of the of the No. 13 Rebellion R-One continuing straight at the first chicane on Les Hunaudières. This was followed by a mechanical failure on the No. 47 Oreca 05 between Mulsanne and Indianapolis as well as a trip into the gravel trap by the No. 55 Ferrari in the Porsche Curves

The session restarted at 19:57hrs, but was stopped again at 20:30hrs when experienced Jan Magnussen had a big shunt in the No. 63 works Chevrolet Corvette C7.R just after the virage du Pont on the exit from the Porsche Curves. The car slammed into the guardrail and the session was red-flagged. The session did not restart. Magnussen was conscious and he was carefully extricated from the C7.R and taken to the circuit medical centre for medical checks. Unfortunately the Corvette will now not start the race on Saturday as it cannot be repaired in time. For the first time in its history Corvette Racing has been forced to withdraw one of its cars from the Le Mans 24 Hours.

The third and final qualifying session began early at 21:30hrs, but the record times set the previous day by Porsche, were not tested by their main rivals Audi and Toyota. The Audis did improve their times to move within less than three seconds behind the Porsches. However, the final stoppage came at 23:05hrs when the No. 67 Porsche 911 GT3 RSR driven by Alex Kapadia, caught fire and stopped between Tertre Rouge and the first chicane. The session did go live again at 23:25hrs, but the final 35 minutes of running did not influence the starting grid order. The Oreca of KCMG celebrated in their garage as they headed the LMP2 times and will start ahead of the No. 26 Ligier of G-Drive racing on the grid. However the biggest smiles were to be found at Aston Martin Racing who managed to clinch poles in both the GTE Pro and Am categories. The No. 99 car held of the Ferrari challenge to take pole in the Pro class, whilst the No. 98 Aston Martin Vantage V8 continued to dominate the Am field. The Le Mans 24 Hours 2015 will start on Saturday at 15:00hrs (local time) and it promises to be another fascinating race.