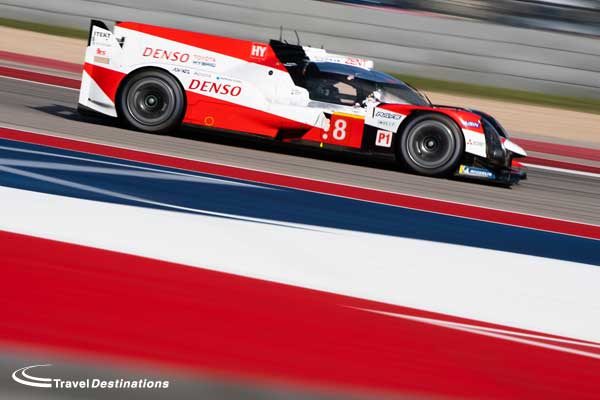 What should we take away from the race weekend last week? That all-eyes are firmly on Super Sebring next month.

If the convergence announcement in Daytona was the appetiser, then Super Sebring’s LMDh technical regulations reveal will be the main course. The dessert in this metaphor will be any big announcements from OEMs that follow.

Where does IMSA-ACO convergence currently stand after Aston Martin announced that its Valykrie-based Le Mans Hypercar programme will be ‘paused’ you ask? It’s an interesting question, and one that is not easy to answer.

Le Mans Hypercar will soldier on. Toyota stressed to the media during the CoTA weekend that it is continuing as planned with its programme. Its new car is in the process of being built; the parts are being manufactured as we speak, with Toyota Gazoo Racing’s technical director Pascal Vasselon telling Travel Destinations that it remains on course to take its car testing twice before the FIA WEC official test at Silverstone ahead of the 2020/21 season opener.

ByKolles is believed to be on course to bring its car to Silverstone to start the season (though any rumours surrounding the Austrian privateer team should be taken with a grain of salt). Glickenhaus on the other hand is now unlikely to make the races in the 2020 calendar year, and will instead debut its 007C at Kyalami in 2021.

Then there’s Peugeot. The Rebellion partnership is no more, but the French constructor is still certain to join the fun, the only question is which route it will take. Its programme is in an embryonic stage (set to debut in 2022), so senior management will be looking closely at the potential of the LMDh formula compared to Le Mans Hypercar, as it could still change to taking the route that IMSA proposes for its FIA WEC effort and still go racing without any delays.

While none of this is hugely positive news, the powers at be at the FIA WEC are pressing on, disappointed, but not panicking about the state of next season. There are plenty of potential solutions, many of them being brainstormed now, to ensure that the top class isn’t a one-horse race. But much more of the creative and positive energy is being poured into the LMDh technical regulations.

Travel Destinations understands that there is still an abundance of manufacturers (some truly surprising) either ‘in the room’ when it comes to the IMSA Steering Committee gatherings, with multiple close to committing to the new formula. The issue here is that the cavalry is not set to arrive until the 2021/22 FIA WEC and IMSA 2022 seasons. However, that will not matter in the eyes of both governing bodies if the factories announce programmes in numbers this year.

There are two Steering Committee meetings remaining ahead of Sebring, one in Daytona this week, the other the week before Sebring, in Sebring. On the agenda is discussions surrounding the finishing touches on the announcement that will be made. The game of poker between the interested parties will begin to enter its final stages once these meetings are adjourned.

We don’t quite know what LMDh cars will look like, though we do know that this is meant to be an evolution of the successful DPi formula. The cars that hit the track will be prototype-based, with each constructor partnering up with an existing LMP2 chassis supplier. They will feature a spec hybrid system to reduce costs and (with more aerodynamic freedom) styling cues that IMSA and the FIA WEC hope will make the cars look more like road-going models than the current DPi challengers.

So much weighs on this set of regulations. With Aston gone (and while it says it has only ‘paused’ its effort, there is widespread belief in the paddock that it is highly unlikely that we’ll ever see the Valkyrie race), it now appears that every single car racing beyond this year in the WEC and IMSA’s top class will be prototype based. This is actually a good thing in some ways, as it will make it easier to balance the two formulas (LMDh and LMH). With nobody going down the ultra-expensive route of converting a road car into a race car, the budget levels should also be far more achievable for everyone involved.

Programmes, as ever, will not be cheap, but in the current automotive landscape, where programmes have never been harder to sign off, reducing costs necessary. The ability to take a pre-existing chassis, and race it with a bespoke (likely GT3-based) engine, with a spec hybrid system has real appeal while we wait for the next wave of technology (all-electric/hydrogen) to develop into something capable of being used in high-performance endurance racing.

The window to do this is now, the opportunity to allow factories to build one car to race globally, at all the major IMSA and WEC sportscar races doesn’t come around often. So it must be grasped at. The FIA, ACO and IMSA know this.

““This week was a difficult week. We are working like crazy. When I’m thinking about Sebring, I have a weekly meeting with John (Doonan) on the phone, and Sebring will be amazing. I’m hopeful of a very good announcement of LMDh, that will be fantastic for the sport,” FIA WEC CEO Gerard Neveu told Travel Destinations, and select media at CoTA.

“We just learned a few days ago about the Aston Martin decision. We have working group sessions with Pierre (Fillon) and a few people in the ACO and FIA, so for sure you will have an exact definition of what will happen next year in the FIA WEC before we open the entry registration.
“At the same time, our first priority now is to deliver the convergence strategy at Sebring. How this announcement is received will give us an indication of how the championship will be in 2021, and will give us a chance to decide the format for 2020.

“The WEC will be here in 2020, no question and we will work on very small modifications and adaptations, the final configuration. You can understand that this discussion will involve the ACO, FIA, Toyota and a few others around the table. It’s too early to tell you something today. We are putting everything into Sebring.”

So now we wait. The plans are in motion to create something truly spectacular. We haven’t seen more than four factory teams racing in the top class of sportscar racing at a race like Le Mans for decades.
Right now it would be easy to look at the current state of sportscar racing and see only negativity. But things can change remarkably quickly. If the announcement next month is, as it is expected to be, well received by the OEMs interested, then announcements will come quickly. The prospect of something truly remarkable, the likes we haven’t seen in international sportscar racing since the Group C era, all of a sudden can become real.