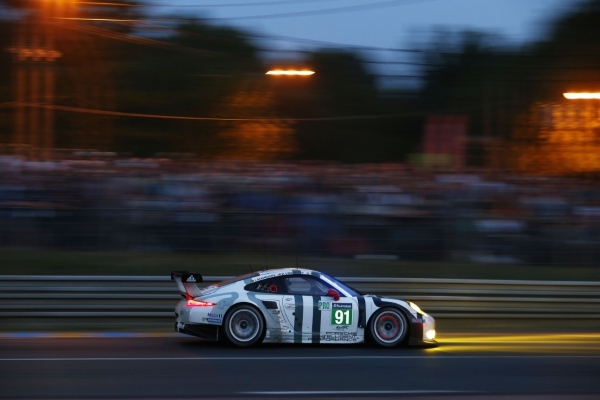 The battle for the overall win at Le Mans this year was good, very good, but the supporting cast in other classes elevated the event to something really rather special.

Le Mans has been for many years a multi-class race but often what or other of those classes produces either a race of ultimate attrition or else somewhat processional affair. That certainly was not the case in 2015.

LMP2 saw a packed and varied grid go in to battle right from the green flag. In an astounding moment of déjà vu the 2014 winning Jota team again hit early trouble only to fight back to the podium. They were mechanical, Or rather electrical, heroics from Greaves Motorsport’s Gary Hirsch, the Swiss stranded by the side the track with a failed alternator and subsequent dead battery. His two hour effort to try to restart the car using a small battery from the data logger was very much in the spirit of the event. Up front though the race soon came down to a sprint between the No.26 G-Drive Ligier, and a pair of brand-new Oreca 05 coupes from the Thiriet by TDS and KCMG teams. The Ligier battled hard, but the Orecas were running in a strong 1,2 formation into darkness until an ill considered lunge from an Aston Martin succeeded in ending the No.46 car’s charge. The Ligier was still in contention, with the fast closing Gibson, and the less pace, but seemingly ever present Murphy Oreca also in the mix. The new Oreca though produced a near flawless run to win. Ex Toyota man Nicolas Lapierre supported by Brits Matt Howson and Richard Bradley to a first ever win by a Hong Kong flagged team. The GT classes too dealt out fantastic entertainment. The race had lost the No.63 Corvette after a jammed throttle put Jan Magnussen into the wall in Qualifying. The sister car though was always in the mix, and eventually came out on top of the combined efforts of the much fancied Ferraris, the fast, but too often troubled, Aston Martins and a Porsche attack that almost literally imploded in the very early running as the No.92 car suffered a very rare and highly spectacular engine failure.

Along the way we were treated yet again to wheel to wheel action from all the major players notably Oliver Gavin in the Corvette whose win this year will count amongst the hardest earned and best deserved of his long career. The GTA Am class too provided plenty of action, though perhaps too much of it involved incident. Notable amongst these were the moments that led to the demise of both Aston Martins in the class. Roald Goethe suffered contact in the worst possible place from the car that would eventually take the overall win, Nico Hulkenberg miscalculating a pass and pitching the No.96 Aston hard into the wall. The car was out on the spot, Goethe suffering fractured vertebrae but Happily now out of hospital and on the mend. The long time class leader meanwhile was another Aston Martin, the No.98 car seemingly cruising to a comfortable win in the hands of Canadian driver Paul Dalla Lana. An incomprehensible error though pitched the Vantage head on into the wall at the Ford chicane, the car out on the spot with less than an hour to run. That’s handed the class win to the Russian owned SMP racing team, the first Russian flagged outfit to win a class here. Behind the winner though there was a battle royal almost to the flag between the No.77 Porsche and the No.62 Ferrari – Intermarque rivalries, and plenty of American interest up for grabs with the additional spice of Hollywood actor Patrick Dempsey announce the squad crewing the Porsche. With the demise of the Aston both would make it to the podium, another iconic image on a day of iconic images.