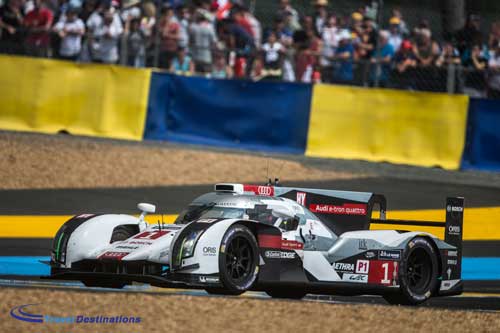 In the wake of a simply epic 2014 Le Mans 24 Hours fans and teams get a while now to take a breath. It is mid September before we see the FIA World Endurance Championship & it’s teams gather again for the newly redubbed ‘Lone Star Le Mans’ at the Circuit of the Americas.

For the LMP1 field there’s much to look forward to:

Audi’s 1-2 at Le Mans puts them right back into the Championship hunt after an uncharacteristically off colour start to the year. Toyota meanwhile faltered at Le Mans and will now be looking for a World Championship win to hang their hope on. In the points standings for the Manufacturers title Toyota lead Audi by just a single point though theres a 10 point margin in the drivers order between the trio in the No. 8 Toyota and the No. 2 Audi.

Porsche must have come home from France much encouraged with reliability from the 919 Hybrid that was far in excess of most observers expectations (and from many within their own camp too!). They are a good result way from the hunt but who would count them out now?

In the privateer LMP1 stakes Rebellion Racing had a great Le Mans, just off the podium with the newly lightened Toyota engined R-One. Better news still though was the unveiling in Le Mans week of the much delayed Lotus LMP1, the AER turbo engined machine has been out testing since then and a race debut in Texas looks ever more likely, though some of the parties involved in the initial project are now involved with the F1 team formerly owned by Caterham.

LMP2’s disjointed start to the season continues to cause concern – though the racing at the front of the pack has been good between the G-Drive Morgan Nissan and KCMG’s similarly powered Oreca the Russian entered SMP Orecas have been off colour from the beginning, though one of them was actually the only full season WEC entered LMP2 car to finish at Le Mans! Bizarrely that means that despite the No. 27 car finishing 12th in the class standings at Le Mans, and 53 laps down on the class winning Jota Zytek, the team scored maximum points – DOUBLED! They lead the Championship as a result.

We’re waiting to see whether the promised addition of the G-Drive Ligier Nissan coupe to the Championship comes to fruition, and we are waiting too to find out when the Strakka Dome coupe will make its racing debut after a torrid time for the team in the early part of the year. If and when the pair of new coupe LMP2s arrive they’ll be a very welcome addition.

Strakka’s debut has been delayed, but the team will race this season after a public apology from Dome for the design issues – someone got their sums wrong. Either way the aggressive looking S103 is on the way.

The GT classes put on their traditionally good show at Le Mans – Ferrari and AF Corse came out the victors this year in LMGTE Pro and now lead the standings in the Teams, Manufacturers and drivers Championships as they attempt to defend all three titles.

Porsche though are lurking, and it’s again a tale of a single good or bad race making a massive difference from here on in. Aston Martin meanwhile have ground to make up – But that’s not so very different to the situation last year! Three teams had a difficult Le Mans, the No. 71 AF Corse Ferrari had a monster shunt with James Calado at the wheel that left the Brit in hospital (now thankfully much recovered), and the car a wreck. A new chassis was built up for the race but the sparkle had gone for that weekend.

The No. 99 Aston Martin was similarly wrecked in a practice accident for Fernando Rees, the Brazilian was basically OK, the Aston rather less so, the car missed the race.

Ram Racing’s campaign at Le Mans was a disjointed one too, the Pro car suffered a fire earlier in the week and a shunt thereafter left them out of contention, out of the points, and in the days that followed, out of business – They’ll be missed, a valuable privateer effort on the world stage with cars in bot LMGTE classes.

The LMGTE Am battle had a fairytale result as the No. 95 ‘Dane Train’ Aston Martin won the big one with some quiet commemoration of their fallen colleague undertaken during Le Mans week. That is a result that will do everyone involve a power of good. The result also puts the No.95 squad atop the FIA WEC class points table.

The double points score from Le Mans gives the Aston Martin a comfortable margin ahead of the No. 61 AF Corse Ferrari, the No. 88 Proton Porsche and the sister No. 98 Aston Martin with the No. 90 8Star Ferrari next up, though the future of that campaign looks set not to involve the owner of the nominal entrant, Enzo Potolicchio. There’s the prospect of guest appearances too from a couple of additional cars for some of the remaining rounds in the Championship, perhaps as early as Austin. So watch this space.

So three races down, five flyaway races to go – and almost everything still to play for in a season that has already dealt out controversy, new stars, new cars and some world class racing – Sportscar racing 2014 style is about to go global.