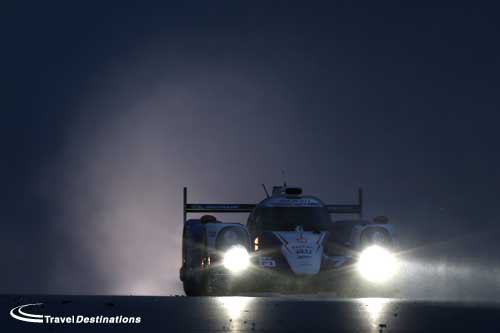 Ultimately it was the contrasting weather and the teams’ choice of tyres at crucial moments during this race that decided the outcome. After a long summer since the Le Mans 24 Hours, all FIA World Endurance Championship teams reconvened at the Circuit of the Americas in Austin, Texas for round 4 of this ongoing battle. LMP1
From the start the Toyotas took the lead. In particular Sebastien Buemi was flying in the No. 8 car before a spin undid his earlier good work. The sister Toyota car closed the gap closely followed by the Audis that seemed to have a power advantage over the chasing Porsches early in the race.
It was the interruption of the weather that changed everything. Austin had been suffering from storms all week and race day was no exception. The dark clouds threatened and then delivered a deluge of rain. Audi called in both cars to change to wet tyres. Porsche called in their cars as well but changed only to new slick tyres. Toyota chose to stay out on their existing slicks, gambling on a brief period of rain. The problem for Toyota and Porsche was that the rain continued for some time, leading to a few incidents where drivers were no longer in control of their vehicles. The No 7 Toyota was caught out at the Esses and slid through sideways, whilst the No 20 Porsche bounced through the gravel and into the barriers. Six other cars including the No. 8 Toyota were caught out by standing water at turn 11 that led to more cars becoming beached in the gravel.
With Audi the only prototypes seemingly able to stay on the track, & no safety car in sight, the race was red flagged. Even then wrong decisions were made as some cars erroneously returned to the pit lane, whilst others correctly stopped on the grid. The race was stopped for more than an hour as the rain continued to pour. The race ultimately restarted behind the safety car with all the cars on new tyres & those rejoining from the pit lane behind those that had stopped on track. The race now had the Audis ahead of the No. 14 Porsche on the lead lap. The spins in the wet had left the Toyotas a way behind.
The No. 14 Porsche did manage to take the lead from the Audis during this latter part of the race as the night descended but engine issues ultimately ruined their challenge. The second Porsche and both Toyotas put in some quick laps in an attempt to catch the Audis, but ultimately it was to no avail as Audi claimed another 1-2 to match their Le Mans result. Those 2 results combined enabled Audi to take the lead in the FIA WEC Manufacturers Championship. A brief mention here should also be made to the LMP1 L class, where Lotus joined Rebellion Racing for the first time this year. The No. 12 Rebellion Racing ultimately took the honours ahead of the Lotus with the sister Rebellion car unable to finish.

LMP2
With the addition of the Extreme Speed Motorsports HPD car there were 5 LMP2 cars that took to the starting grid in Austin. The G-Drive Ligier Nissan started on pole but couldn’t hold the position, whilst early leader KCMG Oreca were ultimately overtaken by Extreme Speed. All three cars lost out during the downpour as SMP Racing benefited and took the class lead. The No. 37 SMP Oreca succumbed to damage resulting from contact in traffic, whilst Extreme Speed’s challenge was dented quite literally from contact to the rear. The No. 30 car would ultimately recover to claim third position. The G-Drive Ligier mounted a challenge to the remaining No. 27 SMP Oreca, but suffered after mounting Austin’s kerbs too many times.
A similar fate befell the No. 47 KCMG Oreca Nissan, who was sent spinning into a tyre barrier. However, the car did recover & eventually chased down the leading No. 27 SMP Oreca. It was a close battle between the two as they approached the chequered flag, but it was the Chinese car that managed to take the win, thus reducing the gap to the No. 27 SMP Oreca in the Championship. GTE Pro
Aston Martin Racing will be very pleased to record a win at Austin, after a hard fought battle with the factory Porsches. The inevitable strong challenge from the Ferraris of AF Corse for once faded in the wet although they recovered in the dark to take a podium spot. During the middle hours of the race, the Porsches looked comfortable. Having taken the lead from the Ferraris, the 2 Porsches looked to be unchallenged. However, as the race progressed so the Aston Martins began their attack. Initially Sefan Mucke lead the challenge, but after an electrical issue curtailed their challenge it was Darren Turner who pushed the Aston Martin challenge home in the No. 97 car. The Leading Porsche was only able to defend the position for so long. Further back the Corvette and the Ferraris were left on the back foot after the rain stoppage and failed to register a challenge. The Corvette’s race on home soil was particularly disappointing for the local crowd.

GTE Am
Aston Martin Racing claimed a double GTE victory as the rain put an end to the Proton Porsche challenge. Both Prospeed Porsche set the initial pace but mechanical issues & dropping a lap behind the safety car left them out of contention. All three AF Corse Ferraris suffered issues as well as being on the wrong side of the safety car when the rain came, whilst the 8Star Ferrari spun in the wet and at turn 20 and was lucky not to collect the traffic behind. The No. 57 Krohn Racing Ferrari also suffered damage in a collision with the No. 99 Aston Martin. As everyone else faltered the two Aston Martins continued trouble free at the front with the No. 95 car taking the win and extending the crew’s lead in the GTE Am class.

The FIA World Endurance Championship now moves on to Fuji, Japan from the 10 – 13th October.