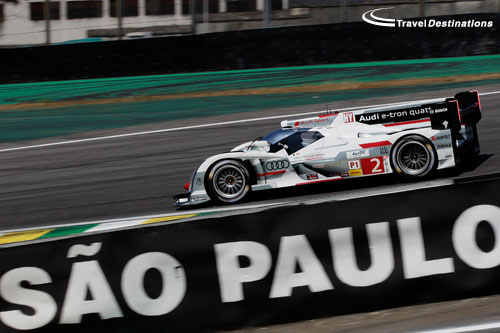 Bright sunshine and warm track temperatures greeted the grid at Interlagos for the 6 Hours of Sao Paulo; the 4th round of the FIA World Endurance Championship.

It was an Audi 1-2 at the front of the grid but a slow start by the No. 1 Audi allowed the quick Allan McNish to take advantage and lead after the first corner in the No. 2 Audi. The single Toyota followed in third ahead of the single Rebellion Racing car completing LMP1.

The G-Drive Oreca Nissan lead away the LMP2 field, but there were position changes in the GTE ranks as a Manthey Porsche briefly took the lead before sustaining damage. Aston Martin then took over before one of the AF Corse Ferraris took up the challenge to lead the GTE Pro class by the 7th lap. Initially the Ferraris kept ahead of the Aston Martins and then the Porsches. The No. 95 Aston Martin had a great start to lead the GTE Am field.

Just after half an hour in to the race a collision between the No. 32 Lotus and the third placed Toyota sent both off in a heavy collision with the tyre wall. Despite the best efforts of Sarrazin, including some impromptu removal of bodywork, this was an early race end for Toyota. The safety car bunched up the remaining cars for the most of the next hour as both cars were removed and repairs made to the damaged tyre walls and barriers.

There were numerous pit stops behind the safety car before it came in about 90 minutes in to the race. The Audi No. 1 benefitted from the pit stops and took the lead from its sister car. The safety car also benefitted the leaders in LMP2 with G-Drive and Pecom Racing now almost a lap ahead of the others.

The GTE Pro battle was now closer than ever and the GTE AM class saw the No. 95 Aston Martin ahead of the orange 8 Star Ferrari and the No.96 Aston Martin. A further safety car was called upon for a dramatic incident involving the No. 71 AF Corse Ferrari. A fuel line break caused a major fire to engulf the Ferrari and saw Tony Vilander bale out of the car and hurry over the barriers fearing an explosion. Despite the best efforts of the marshalls and the fire staff at the circuit the burnt out remains of the car was a sorry sight. The safety car again brought the GTE Pro field together with the surviving AF Corese Ferrari ahead of Aston Martin ahead of Porsche.

There was disappointment for the many Bruno Senna fans at the circuit as the No. 99 Aston Martin Racing V8 Vantage was forced to retire with suspension damage.

By now the 2 Audis were 45 seconds ahead of the Rebellion Racing Toyota in LMP1. In LMP2, G-Drive extended their lead in LMP2 to 24 seconds to Pecom Racing. In turn Pecom were more than 30 seconds ahead of its nearest rival. The ADR-Delta car succumbed to engine problems meaning that one third of the field had retired before the halfway point of the race.

It wasn’t long after Loic Duval had taken over from Tom Kristensen at the wheel of the No 2 Audi when it struck problems. Leaving the pit lane the Audi lost a wheel & it bounced in to the tyre wall. Remarkably as the Audi came to rest, so did the errant wheel on the back of the car. Duval then showed remarkable skill in getting the car back to the pit lane on 3 wheels with the 4th balanced on the bodywork. However, although the No.2 Audi just retained 2nd place it was now a lap down on the No 1 car.

The GTE Pro battle continued to be close with 2 seconds separating the AF Corse Ferrari with Giancarlo Fisichella behind the wheel, from the Stefan Mucke’s Aston Martin.

As the race entered its penultimate hour & with G-Drive dominating the LMP2 race, the Oak Racing cars began to make their move, taking 2nd and third from Pecom Racing. In GTE Am the Danish Young Drivers of Aston Martin were doing so well they found themselves amongst the GTE Pro field but also in traffic.

The Audi No. 2 car was penalised by the stewards twice. Once for the unsafe release of the car with the wheel not secure, and second for speeding in the pit lane. Not the usual Audi systematic performance, however they were fortunate that the earlier retirement of the Toyota meant that they could soon regain second place from the faultless Rebellion Racing.

Disaster befell the Young Driver Aston Martin team when all was looking so good. They too lost a wheel out on the track, however, unlike the Audi, they could not recover the situation. This left the British team of Stuart Hall and Jamie Campbell-Walter to inherit the GTE Am lead in the remaining Aston Martin.

In to the last hour, the sun began to set, sending elongated shadows across the circuit. The race at the front was done but the battle in GTE Pro continued. For nearly 90 minutes Gianmaria Bruni’s mirrors were filled with Darren Turner as the AF Corse Ferrari held off the Aston Martin Vantage. The AF Corse team thought they had won it, only to realise that the No 1. Audi had crossed the line before the end of 6 hours, so another lap was required.

As the chequered flag eventually fell (as had the sun) Marcel Fassler brought the No. 1 Audi home with Allan McNish in the sister car keeping formation for a 1-2 win for Audi. Audi remain unbeaten in the FIA WEC but the points gap between the two cars is now reduced. Rebellion Racing continued their consistent year with a podium place.

The G-Drive Oreca-Nissan dominated the LMP2 class and deserved the win. A very light on fuel No. 35 Oak Racing Morgan Nissan held on for second ahead of Pecom Racing in third.

The GTE Pro battle remained close but Turner could just not get by Bruni, and he held on for an AF Corse Ferrari win ahead of the Aston Martin with Manthey Porsche taking the third place

The No. 96 Aston Martin Racing V8 Vantage won in GTE Am ahead of the Ferrari of 8Star Motorsport. The Proton Porsche managed to clinch third place by just 3 hundredths of a second from the unlucky IMSA Porsche team.

The FIA World Endurance Championship now moves on to Austin, Texas for the 6 Hours of the Circuit of the Americas, which promises another fascinating race on another spectacular circuit.