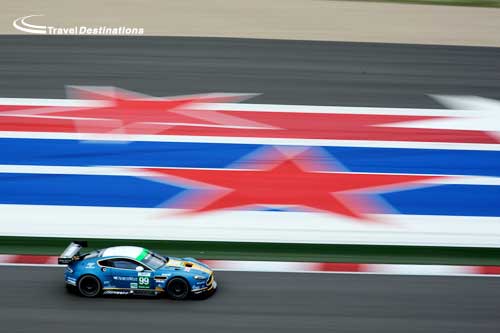 It seems a very long time since Le Mans, but the FIA World Endurance Championship gets back underway in just under a month’s time after a summer break extended by the shift of the Brazilian round to the very end of the season to avoid the Football World Cup. Round four then sees the teams head to the United States for the ‘Lone Star Le Mans’ meeting, the cars set to race into darkness at the Circuit of the Americas in Austin, Texas. The factory LMP1-H teams will be out in force once again, Audi on the crest of a Le Mans winning wave, Toyota looking to reinforce their status as the season’s pacemakers, their TS040s having won at both Silverstone and Spa. Mike Conway will be substituting for Kazuki Nakajima in Austin, the Japanese is otherwise engaged with racing commitments in Japan.

Porsche meanwhile have been testing the higher downforce aero package on their 919 Hybrid since Le Mans and will come into the second half of the season buoyed up by a performance over the 24 Hours that exceeded most peoples expectations on both pace and reliability.

In the LMP1-L category Rebellion Racing too will be in good spirits after an excellent fourth position overall at Le Mans for their #12 R-One. Better news still though is that they will have competition in the sub-class for the very first time as the AER twin turbo V6 powered Lotus T129 makes its season debut. Extreme Speed Motorsports are entering one of their HPD ARX03b cars in the WEC event, with their other car in the Tudor United Sportscar Championship race that takes place on the same morning.

The HPD have team owners Ed Brown and Scott Sharp joined by Scottish hotshoe Ryan Dalziel, the team keen to see how they match up to the WEC regulars as they assess their racing options for 2015.

They’ll be up against the G-Drive Racing team’s brand new Nissan engined Ligier coupe, the very pretty new car went very well indeed at Le Mans and will no replace the previous open topped Morgan LMP2 chassis for the remainder of the World Championship.

KCMG are back again with their Oreca Nissan whilst Russian outfit SMP Racing return to their pre-Le Mans driver line-ups for their pair of similar machines.

In an odd quirk of the WEC points system the LMP2 points advantage is now held by Sergei Zlobin, this despite the fact that the SMP drivers form has been less than impressive thus far in 2014. The lead has been gained though as the SMP Oreca that he was driving at Le Mans was the only full season LMP2 car to finish the race, albeit down in 12th place in the class – As first to finish in the Championship standings though he gained maximum points – indeed DOUBLE maximum points!

There’s no running yet for the delayed Strakka Dome Nissan, the car now set to debut at the season finale in Brazil. In GTE we’ve lost the popular Ram Racing team from both the Pro and Am entry, their Ferraris withdrawn, and the team having closed its doors.
The factory teams in LM GTE Pro from Aston Martin, Ferrari and Porsche are joined on home ground by an additional entry though, Corvette Racing fielding a singleton Corvette C7.R for an all American driver line-up of Tommy Milner and brothers Jordan and Ricky Taylor.

Elsewhere in the list the Belgian Prospeed Competition squad have replaced their older Porsche with a 214 spec 911 RSR whilst American Jeff Segal replaces Enzo Potolicchio in the #90 8Star Ferrari. Whatever happens at the Circuit of the Americas, it is a welcome return to action for the FIA World Endurance Championship.