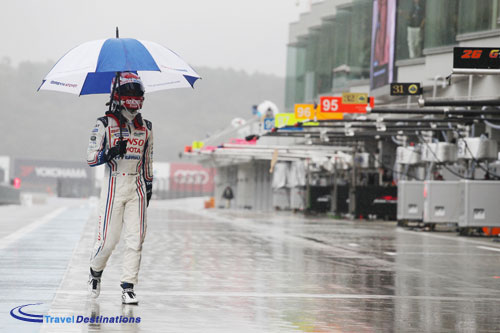 Intense and prolonged rain curtailed the sixth round of the FIA World Endurance Championship at Fuji, Japan. Steady rain prompted race control to start the 6 hours race behind the safety car but after 8 laps under worsening conditions the stewards called a temporary halt & all cars returned to the pit lane. The cars did return to the track nearly half way in to the allotted time of the race; however this resumption only lasted 22 minutes before the cars were recalled again.

Finally a further resumption was attempted behind the safety car 4½ hours in to the race time available, however, after just one lap; the race was red flagged as the stewards declared the conditions still unsafe for racing. The disappointed, loyal crowd were rewarded for their patience is such wet conditions by an impromptu driver autograph session in the pit lane.

As a result of the shorter race distance, drivers were awarded half points (even if they never actually made it in to the cockpit of their car!). This means that Audi have won the manufacturers world championship with 2 rounds still to come in Shanghai (10th November) and Bahrain (30th November).