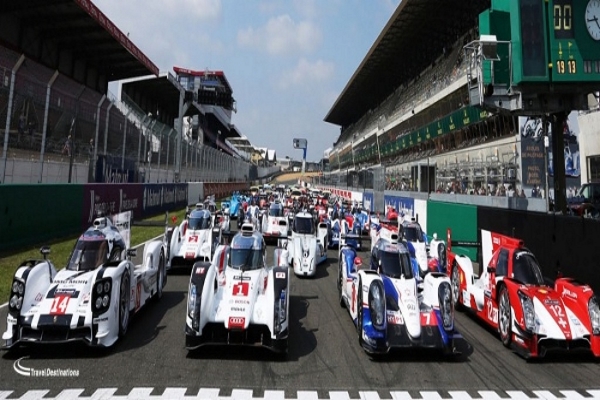 The Automobile Club de l’Ouest (ACO) have announced the list of the 56 cars invited to take part in Le Mans 2015 taking place from the 13th-14th June. They also unveiled the poster and the television advertisement for the 24 hours race. The field entered for the 83rd Le Mans 24 Hours promises a highly competitive race, and choosing a likely winner in each of the four categories will prove difficult.

The start of the 83rd Le Mans 24 Hours will take place as usual at 3pm on Saturday 13th June. Fifty-six cars will take part in the blue riband event on the FIA World Endurance Championship calendar (the third running of the championship) divided up into four categories: 14 LMP1s, 20 LMP2s, 9 LMGTE Pros and 13 LM GTE Ams.

In LMP1 the big news is the return of Nissan with three of its spectacular GTR-LM NISMOs. The car was revealed last Sunday in the United States. Thus, the Renault-Nissan tandem will take on Audi, Porsche and Toyota in the battle for outright victory. It will be a German-Japanese duel with two German manufacturers up against two from the land of the rising sun. Each team is using a different technology, proof of the validity of the regulations introduced by the ACO in 2014. Completing the LMP1 field are three privately-entered cars from Rebellion Racing (2) and TeamByKolles. A total of six manufacturers will go head to head in LMP1.

Eight different makes of chassis will compete in the LMP2 class, making up a field of 20 cars, once again the biggest category in the race. Jota Sport, which will be back with an up-dated version of the winning car in 2014 (now called the Gibson 015S-Nissan), will have a tough job to retain their title. They will be up against newcomers like the HPD ARX-O4bs and the Oreca 05s. Ligier, which made its Le Mans comeback in 2014, will be the best-represented make in the category with five cars.

In LMGTE Am Aston Martin will also be out to achieve a repeat of their 2014 victory, but to do so they will have to fend off top teams like AF Corse, JMW Motorsport and SMP Racing. Back again (for the fourth time) is American actor, Patrick Dempsey, at the wheel of a Porsche entered by the Dempsey Proton Racing team.

The field for the 2015 Le Mans 24 Hours breaks down into 34 prototypes and 22 GTs made up by 17 different makes from the biggest car groups in the world, ranging from the competition versions of the most beautiful GT cars on the market to the best builders of racing chassis. The 31 teams entered represent 13 different nationalities and the highest numbers of cars come from Germany (11), Great Britain and the United States (9), Japan (6) and Russia, Italy and France (5) respectively further proof of the incredible appeal of the race.

The list of reserves comprises seven teams combining LMPs and LM GTEs, which will be allowed to race in the order on the list should there be any withdrawals.

Pierre Fillon, President of the Automobile Club de l’Ouest said “Once again the field for the Le Mans 24 Hours consists of fifty-six top-quality cars. We’re delighted to welcome a new manufacturer with the arrival of Nissan, which is proof of the immense appeal of our event for the major motor car manufacturers. Viewing things from a wider perspective, the fact that we have teams from thirteen different nationalities again shows the international appeal of our race. We’re very proud that the major countries in the motor industry and car culture in general provide the highest number of representatives, and it confirms yet again the link between our race, the car industry and the everyday motorist’s car of tomorrow.”

Vincent Beaumesnil, Automobile Club de l’Ouest’s Sport Manager commented that “Every year the selection committee for the Le Mans 24 Hours is finding it increasingly difficult to establish the list of entries. Things are really looking up in the prototype categories with more top-level teams arriving. In GTE Pro the quality of the manufacturers entered guarantees yet another incredibly closely-fought race, and in GTE Am the overall high level of preparation and involvement is very impressive. From a technical and sporting point of view we’re expecting to see a level never before achieved: it’s going to be a great race.”

Demand for tickets for Le Mans 2015 is equally high. With disruption to campsites such as Maison Blanche (with the building of the Porsche Experience Centre) and new campsites not able to run to full capacity (Epinettes) spectators have been booking early to reserve the campisites, grandstands & tickets that they want. Although the reduced Maison Blanche campsite is now sold out, along with other popular sites such as Tertre Rouge, there are still a selection of campsites available to choose from.