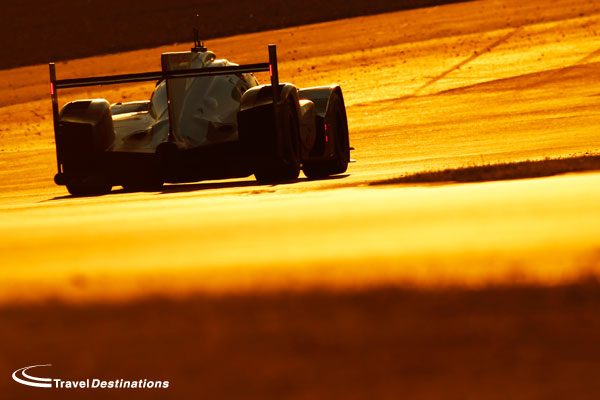 The 85th running of the Le Mans 24 Hours may be most remembered for sunshine and shocks; the race was completed under clear skies and daytime temperatures in excess of 30 degrees centigrade, and shock results as most of the factory team cars fell by the wayside allowing two LMP2 cars on to the overall Le Mans 2017 podium. LMP1
Although the Le Mans 2017 had a relatively low attrition rate, that could not be said of the top LMP1 class. In the end, no car avoided lengthy time in the garage & only two cars actually completed the distance. The writing was perhaps on the wall early when a Toyota sustained damage in the early laps, causing debris to hit the ByKolles Racing team car. Despite it limping back to the pit lane, the car was never going to return. With the numeric disadvantage of only 2 cars, Porsche suffered a blow when the No. 2 car dropped out of the top 50 cars, after having to spend an hour in the garage for a rebuilt front axle.

Toyota looked to dominate the first period of the race. They secured a 1-2 for much of this time with the lone Porsche never far behind. The No. 7 Toyota leading the way and looking particularly fast in the early stages. However it was all going to go wrong for Toyota as darkness fell and the demons arrived. One by one, they experienced power problems. Only the No. 8 car managed to return to the race, but after losing more than 2 hours in the garage, they were never in contention for the overall win, despite setting the race’s fastest lap.

The demise of Toyota’s challenge left the No.1 Porsche with a free run at the chequered flag. They managed to survive the night and most of the morning, until, with just four hours to go, oil pressure problems left them limping with just electric power down the Mulsanne straight. Despite Andre Lotterer’s best efforts the car ground to a halt and could not get going again.

The demise of the No. 1 Porsche briefly opened the window for an LMP2 win, as No.38 Jackie Chan DC Racing Oreca-07 Gibson, inherited the lead. However, their hopes were dashed, with the flying return of the No. 2 Porsche. Despite their early delay in the garage, the No. 2 Porsche came flying back through the field. Brendon Hartley, Earl Bamber & in particular Timo Bernhard got the best out of the car, and managed to avoid and pass the traffic with ease. They took the lead with almost exactly an hour to go and didn’t look back, eventually crossing the finish line more than half a lap of the second placed car. A remarkable turnaround then from the No.2 Porsche team, who were not even in the top 50 cars after their technical woes. LMP2
Whilst the top class suffered with a very high attrition rate, the opposite could be said of the biggest field in the race; LMP2. Only four of the twenty-five cars in this class failed to finish. This is all the more remarkable considering there were new regulations for this class this year, and none of the contenders had completed a race of this distance. Despite many expert predictions to the contrary the LMP2 class not only showed the necessary endurance, but also very nearly pulled of the overall win.

For the majority of the race the two cars from Vaillante Rebellion showed their experience and stayed at the front of the pack. Having raced LMP1 cars over the last few year, the Rebellion team clearly know a thing or two about how to race at Le Mans. The G-Drive and CEFC Manor TRS Racing teams, also showed strong performances, but ultimately the story of this class enfolded late on. Having watched the LMP1 cars disappear in front, and finding themselves more than 10 laps behind the leaders, the LMP2 cars started to climb the leader-board as the manufacturer LMP1s began to retire. When the leading No.1 came to a halt on the track, it was the No. 38 Jacki Chan DC Racing car that caught up and inherited the lead of the race. They managed to defend that position from other LMP2 challenges, and for 2 hours they continued at the front. It would have been the most remarkable story. A David vs Goliath type victory, however it was not to be. Despite the best efforts of Thomas Laurent, Oliver Jarvis and ultimately Ho-Pin Tung, behind the wheel, they were unable to compete with the superior speed of the Porsche No. 2 car that reeled them in; hunting them down shark-like and then passing them with only an hour of the race to go.

Despite this the all involved with the No. 38 car should be immensely proud of what they achieved; not only winning the LMP2 class, but finishing second overall at Le Man. The No. 13 Vaillante Rebellion ended second in class, so took the third step on the overall podium which was just reward for the excellent Rebellion team. GTE Pro
There had been much criticism before the race about the rule makers and the changes made under the balance of performance regulations. It is a complex thing trying to make all cars competitive and in the past, this has been hugely unsuccessful. However, credit where credit is due, they definitely got it right this time and they provided the spectators with a remarkable race. In fact had Hollywood script writers come up with the story they would have probably rejected the idea under grounds of lack of reality.

No one manufacturer was able to dominate this class. Even Ford’s numeric advantage didn’t help them get ahead. Hour after hour, often minute after minute, the lead changed hands. The racing was so close, that as cars peeled off to complete their pit stops, the next car would inherit the lead. Once that car pitted the baton was passed on. And do it went on throughout the race.

Quite unbelievably going in to the last hour of the 24, each manufacturer had a car on the lead lap. Corvette, Aston Martin, Ford, Porsche and Ferrari all had a chance to win. Nobody was able to pull away and seconds separated all five cars. In the end it came down to pit lane strategy and a bit of luck as to when the race was actually going to finish. Aston Martin were leading, but had to have an extra stop for fuel. This opened the door for Corvette. With the other three cars fast catching, Corvette with Jordan Taylor at the wheel, left the pit lane with Aston Martin and Jonny Adam filling its mirrors. It was going to go right down to the wire. The two cars continued to lap just seconds apart as Jonny Adam looked for a place to attack. It looked as though Jordan Taylor had done enough to keep ahead and take the win, when the Aston Martin braked late at Mulsanne and tried to pass. Quite legitimately the Corvette closed the door as they exited and the corner, but there was contact between the two.

The two cars continued around for one more lap, but suddenly the Corvette had an issue and cut one of the chicanes on the Mulsanne straight, skidding across the gravel, but retaining the lead. However, Jonny Adam could sense he might get one more opportunity. It came literally at the start of their last lap. Coming through the Ford chicane on to the start finish straight, the Aston Martin took advantage of the damaged Corvette and powered past. Despite the great skills of Jordan Taylor there was nothing he could do to protect the lead. As the Aston Martin disappeared to take the win, salt was rubbed in to Corvette’s wounds as the No. 67 Ford managed to catch the limping Corvette and demote them to third in Class. Nevertheless all teams involved should take great credit for their efforts. This was a very hard fault battle that really entertained the fans, and should be remembered for a very long time. GTE Am
The battle in GTE Am was not as close as the Pro class. In the early running, it appeared that the No. 98 Aston Martin would run away with it. However, technical issues dragged them back. The speed shown by the Larbre Competition Corvette in qualifying never reappeared, and it was left to the Ferraris to dominate the class. The No. 84 yellow and black, JMW Motorsport Ferrari 488 GTE took the lead in the darkness and was not in the mood to relinquish the position once daylight returned. For hours they remained at the front of the class, often mixing with the back markers of the GTE Pro field. They managed to spend the minimum of time in the pit lane and came home to be quite comfortable winners in the end. The other class podium slots were also filled by Ferraris, clearly the car to have in this class, with Spirit of the Race and Scuderia Corsa coming home second and third.

Overall this was an excellent race, and one that will be much talked about around the trackside barbecues tonight. Porsche were the outright winners, but the plaudits will be taken elsewhere in the classes below. Le Mans 2017 will be remembered for the hot temperatures around the circuit and the amazing racing that took place on it. Roll on Le Mans 2018.