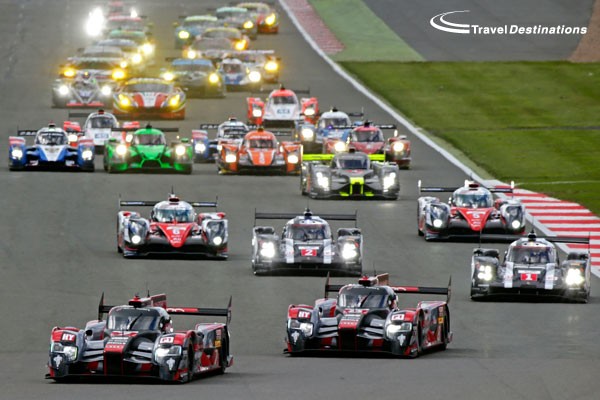 The FIA World Endurance Championship – which includes the Le Mans 24 Hours – had its opening race last weekend at Silverstone, and provided a few hints as to what we can expect from this year’s twice-round-the-clock classic at La Sarthe.

Dailysportscar.com’s lead WEC reporter Stephen Kilbey looks back five of the key topics as the dust (& snow) settles on the 6 Hours of Silverstone:

1. Audi is back to winning ways… Well, sort of. With so many question marks surrounding both Audi and Toyota, who enter the 2016 season with brand new cars, Silverstone was always going to be fascinating from an LMP1 point of view.

While Toyota were once again lacking pace, throughout the weekend, Audi and its brand new R18 looked like it may have the pace to challenge Porsche’s formidable 919 which won both Le Mans and the WEC title last season. Qualifying was held on a drying track after snowfall early Saturday morning, and Andre Lotterer and Marcel Fassler managed to stick their #7 Audi on pole for the first time since the 2013 6 Hours of Fuji.

In the race, the reigning WEC champion #1 Porsche of Mark Webber, Brendon Hartley and Timo Bernhard managed to snatch the lead off the Audi and race off into the distance. Hartley though, crashed out in dramatic fashion just before the halfway mark, almost rolling the prototype after tagging a GTE Porsche running through Farm curve.

The incident handed Audi its lead back, and triple Le Mans champions managed to hold off the other Porsche until the finish. However, a post-race technical check of the winning R18 revealed that the front plank was too worn, and therefore prompted the organisers to disqualify the car from the race. The #2 Porsche of Marc Lieb, Romain Dumas and Neel Jani therefore claimed the victory.

While it’s way too early to tell if Porsche will win Le Mans again or not this year, all signs point to the 24 Hours being another close-fought affair.

2. The pace of the Hybrid prototypes is still astonishing The current era of P1 cars really do need to be seen to be believed. Last year, the factory prototypes took an enormous step in regard to raw performance, especially towards the end of the WEC season when Porsche turned up at the Nürburgring fresh from its 17th Le Mans win with a new aero package.

Going into 2016 the ACO has tried to peg back the top cars, forcing them to use 30% less fuel per lap. But intelligent engineers at Toyota, Porsche and Audi seem to have managed to gain the previous level of performance back that and a little bit more by improving other areas.

At Silverstone the P1 cars were going faster than 2016, producing lap-times comparable to that of a mid-pack Formula One car, but with a weightier chassis and more traffic to deal with. If the form continues on a low-drag circuit like Le Mans, then expect the lap-record to be broken once again in Qualifying if the weather holds out.

3. Ford could well have a good run at Le Mans There’s a lot of pressure on GM’s finest going into this year’s Le Mans 24 Hours, it being the 50th anniversary since Ford’s historic first win. Nevertheless, the new GTE programme continues to impress. The new Ford GT’s first outing at Daytona back in January was problematic, but fast forward a few months and it looks far more capable of a head-turning debut at the big one in eight weeks time.

Both of Ford Performance’s new cars ran faultlessly during the race at Silverstone, finishing up fourth and fifth in the GTE Pro class. On pace they weren’t able to challenge the might of AF Corse’s Ferraris, but the raw speed should come with its new found reliability.

With four factory-entered Fords due to compete at Le Mans, don’t be surprised if the GTE newcomers leave with an impressive result. 2015 was tough for the British factory team run by Prodrive. Its Vantages were often far off front-running pace throughout the year and failed once again to win the GTE Pro class at Le Mans.

If the first round of 2016 is anything to go by though, Aston Martin looks in a lot better shape than was predicted. With brand new Dunlop tyres that will only get better with further development, a return to a green paint scheme and an aggressive aerodynamic overhaual to its Vantages, it should be able to build on the solid podium finish on home soil and win its class for the first time at Le Mans in eight years.

5. The WEC continues to build on its extremely positive foundation While the Le Mans 24 Hours will always be the jewel in the WEC’s crown, the exceptional racing, interest from more blue-chip manufacturers and a very stable calendar is paying off big time for the FIA’s youngest World Championship.

Crowds at European rounds like Silverstone and Spa have been growing year on year, and that’s only a good thing for the future of sportscar racing as well as the Le Mans 24 Hours. Last year, a record crowd of 263,000 people turned up to La Sarthe in June to witness history, and with momentum continuing to build don’t be surprised if that record is shattered once again.

If you would like to attend the Le Mans 24 Hours 2016 then Travel Destinations have a selection of travel, ticket and camping packages available.

If you would like to attend the FIA WEC 6 Hours of the Nurburgring in July, then Travel Destinations also have an exclusive travel, ticket and trackside camping option available.

If you would like more information on either of these offers please click on the links above or call our reservations team on 0844 873 0203.