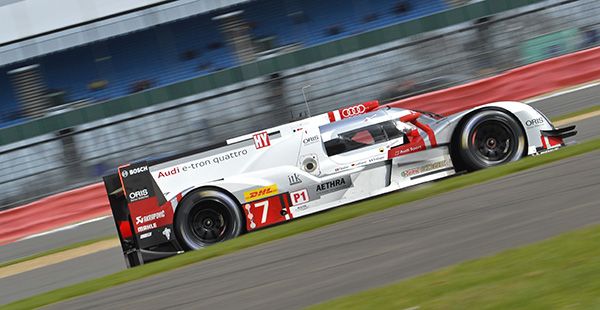 Desceptive spring sunshine with a gusting cold wind welcomed race fans to Silverstone yesterday for the 1st round of the FIA World Endurance Championship. After the new “Le Mans style” team line ups and national anthem on the grid before the green flag it was down to business for all the teams keen to start the season with a class win. Porsche had locked out the front row from Saturday’s qualifying and they continued to show that speed as both cars accelerated away from the chasing pack. The opposite happened to the No. 7 Audi as it struggled to get off the line straight away. Not only did the driver, Treluyer, see the rest of the LMP1 grid continue around the first corner, but he was then passed by most of the LMP2 runners as well. It may have been the surprise of the slow running Audi that caused the new Strakka Racing Dome (LMP2) to immediately spin off in to the gravel, sending them to the very back of the grid.

Within 6 minutes of the start the leaders were in traffic as they caught up with the back markers in the GTE field. The closing speeds between the two classes were amazing. The speeds of the whole LMP1 grid werte impressive throughout. The lap times were comparable with the middle runners of the F1 grid last year. Bearing in mind the weight of the cars, the fuel and the distance of the race, this was quite amazing. Mark Webber’s Porsche was particularly quick, pulling out a 10 second advantage on his team mate in second place. Behind them the battle between Audi and Toyota for third place saw them trading places in and out of various corners. Just behind the leaders in the LMP2 field the KCMG Racing prototype benefitted from a great start to take the lead in class, but within the first hour it was being chased down by the two orange and black G Drive cars. Despite a valiant effort from Tandy behind the wheel, he was passed on consecutive laps and the G Drive cars didn’t look back. The returning Strakka Racing car, was recovering from the spin at the back of the class and had a difficult view as it began to fight its way back through the congested field of cars.

Aston Martin began at the front of the GTE Pro field and started well, initially holding off the challenge of Porsche, with Ferrari staying out of trouble and watching developments unfold in front of them. GTE Am was equally close with the sole Corvette getting ahead of the Porsche and the AF Corse Ferrari, with Aston Martin waiting behind. The running order was to change just in to the second hour. The leading Porsche, with Mark Webber at the wheel, was recalled to the pits and wheeled back in to the garage. Unfortunately it was never able to return to the race, as a driveshaft failure curtailed their race, leaving a lone Porsche out at the front.

Audi’s double challenge was reduced in force shortly after Porsche. Following an impact with a GTE Porsche at Becketts, the No. 8 Audi had to return to the pits for bodywork repair. Time in the garage cost the car a lap to the leaders, but the damage appeared a little more than cosmetic as the car never really recovered and continued to look unstable when it returned to the track. The car had a spin later with Olly jarvis at the wheel and their challenge was all but over.

At the front the battle was really just getting interesting. Over the period of more than an hour the remaining Audi and Porsche became locked in a tremendous battle. They were also briefly joined by the No. 1 Toyota as the pit stop strategy panned out. The lead constantly changed between the cars while Neel Jani and Marcel Fassler, expertly weaved their cars through the traffic. The Porsche was clearly able to pull away from the Audi along the straights, but it was quickly reeled in again by the Audi under passed under braking in to the corners. The battle continued for lap after lap, neither able to put any distance between themselves and their rival, despite different pit stop & tyre stinting strategies. Eventually the No. 7 Audi managed to build a small gap and the Porsche had to be careful as the chasing Toyotas double stinted the tyres bringing them back in to the mix. Toyota and Porsche both challenged the leader throughout the rest of the race, but neither could hold the lead for any length of time, and going in to the last hour the Audi continued to lead with a gap of almost 40 seconds.

The LMP2 race became a comfortable 1 -2 for the G-Drive Racing. Once they had passed the KCMG car they built a lead that could never be surpassed. The No. 26 car finished ahead of the sister Ligier. The battle behind them saw the fluorescent green Extreme Speed HPD car finish in the third podium spot, but they were later disqualified by the stewards for worn planks beneath the car. This meant a late promotion for the Strakka Racing Dome that had fought its way back from that initial spin at the first corner. A great effort from the British based team. The GTE Pro race was much tighter. The initial dominance of Aston Martin was undermined by a pit strategy mistake under a full course yellow, that set their pit stops off against the Porsche and Ferraris who ended up making less stops. The Manthey Porsche team looked strong but ultimately it was the vast experience of Bruni and Vilander that brought the ever-reliable AF Corse Ferrari home in front for the win.

Aston Martin had greater success in the GTE Am class, with the No. 98 car holding off the challenge from Ferrari to win the class. The No. 50 Larbre competition Corvette would probably have mounted a real challenge, but it sustained damage after a collision with a speeding Audi and the resultant run across the gravel.

Back in the top class it was difficult to call a winner right up until the end. Audi continued ahead of Porsche who were in turn still ahead of Toyota; a three way fight to the finish. The Audi had built enough of a gap to enable them to pit for a splash and dash to the line, but the Porsche and Toyota were closing. Just as the Audi was coming in for that last stop, the stewards gave the Audi a stop/go penalty for overtaking GTE cars by pulling off the track. The Audi came back to the pitlane following their outlap and served their penalty to emerge again just seconds ahead of the closing Porsche. The gap was now much reduced to just 8 seconds with only 10 laps remaining.

In the last few laps the Toyota in third continued to catch the Porsche in second, who in turn was catching the leading Audi. The Porsche closed the gap to less than 8 seconds but couldn’t quite catch the Audi. Marcel Fassler held on to give the No. 7 Audi the win and start the 2015 FIA WEC season on the top of the podium.

This was an incredible endurance race, and sets up the rest of the season perfectly. All three prototype challengers appear to have improved on last year’s models and there is clearly little to choose between them. Nissan (who were displaying their cars at Silverstone) will be added to the cocktail at Le Mans. This could be the best FIA World Endurance Championship season yet.

You can join us at the next 3 rounds of the FIA World Endurance Championship. We have travel, tickets and camping options available for Spa-Francorchamps, Le Mans and the Nurburgring. Call us now on 0844 873 0203 to reserve your place!