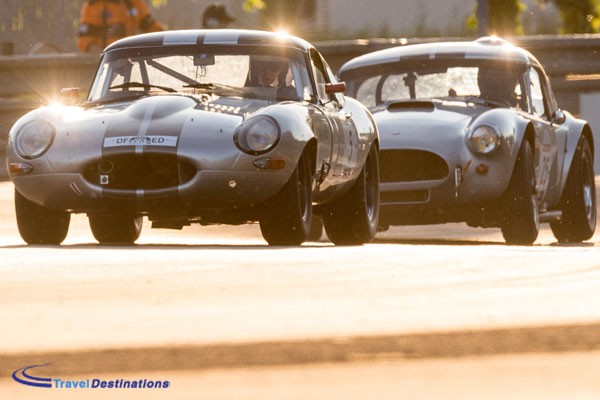 The sun shines on the Le Mans Classic

On Sunday at 4pm, the flag came down on the 8th running of Le Mans Classic. This biennial event celebrates the history of the Le Mans 24 Hours and has grown in stature and crowd numbers on each occasion.

This year’s event was blessed by exceptional weather, as crowds in excess of 123,000 witnessed a full weekend retracing the history of the greatest endurance race in the world over the period 1923 to 1993. 550 cars took to the track, with 1000 drivers, including 10 former Le Mans winners, navigated the circuit in race conditions. In addition to the racing cars, a further 8500 cars represented 180 makes’ clubs assembled to display their vehicles around the Bugatti circuit. Important notice was taken of the celebration of BMW’s centenary and the 50th anniversary of the Ford GT40’s first victory in the Le Mans 24 Hours with appropriate displays. Concourse competitions, the Le Mans Heritage Club, the “Little Big Mans” children’s race, a special exhibition devoted to racing team transporters and a host of other entertainment and activities in the main village meant that all the right ingredients were in place to make this huge celebration of motor sport.

Among the innovations this year was the opening of the circuit on Friday morning representing an additional five hours of track time so that more practice session could be scheduled, as well as the Group C races with an entry of almost 40 cars represented. There was also the magnificent field of the Jaguar Classic Challenge with around 60 cars representing the Coventry make. Victory in this event went to British driver Andy Wallace (19 starts in the Le Mans 24 Hours including outright victory in 1988) at the wheel of the Jaguar D-Type that won Le Mans in 1955.

At 4pm on Saturday American music star (and motorsport fan) Pharrell Williams waved the French flag to begin the 24hrs of racing around the full 13,629-km circuit. These races were divided in to 6 grids covering the period 1923 to 1981. Each grid took to the circuit in day and night across the Saturday and Sunday.

The 8th Le Mans Classic consolidated the success of the previous events thanks to the attendance of its faithful fans and the beautiful weather. The good news is that the Le Mans Classic will return in 2018 for the 9th edition, but for those that can’t wait that long for your historic motorsport fix, perhaps you might like to join Travel Destinations at the Spa Classic in May 2017.