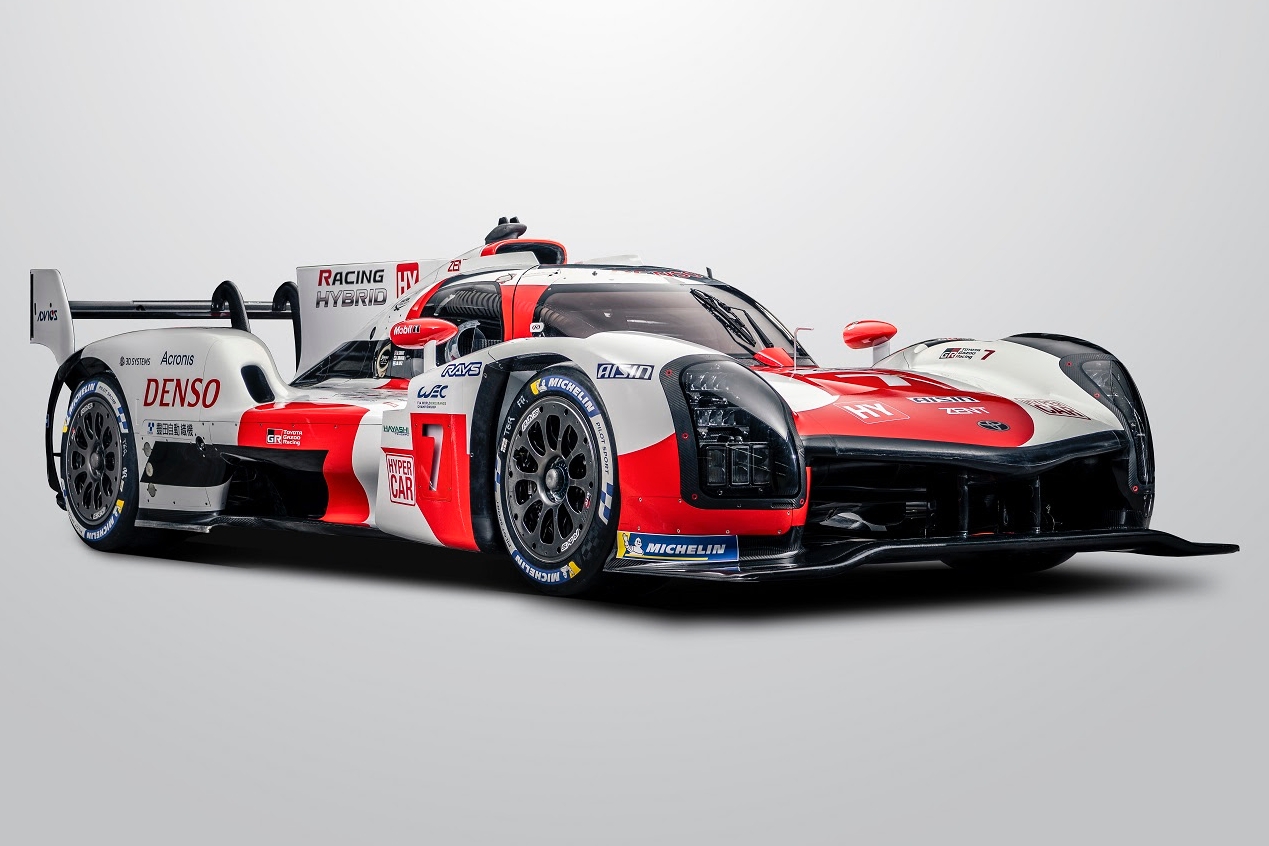 Toyota Gazoo Racing has officially kicked off the Le Mans Hypercar era by formally unveiling its brand new GR010 HYBRID challenger, which will make its global race debut in the opening race of the 2021 FIA World Endurance Championship season at Sebring in March.

After years of planning, designing, developing and more recently, manufacturing and testing, the wait is almost over for Toyota. The Japanese marque, which has won the last three Le Mans 24 Hours, has moved into a new era of sportscar racing and become the first marque to make the leap with a new car. Following multiple evolutions to its 2016 TS050 HYBRID over the past four years, it is refreshing to see a brand new car emerge from TGR’s headquarters in Cologne.

The GR010 HYBRID is a prototype racer based on the forthcoming GR Super Sports concept car which completed demo laps at Le Mans last September. While elements of the design feature nods to Toyota’s hybrid LMP1 cars of recent years, under the skin, it’s a very different animal to its predecessors, as it shares fundamental DNA with its road-legal counterpart.

The car will be powered by a four-wheel drive hybrid powertrain, with a 3.5-litre V6 twin-turbo engine, providing 680hp to the rear wheels, combining with a 272hp motor generator unit. With the total power output of the car capped at 680hp by regulation, the hybrid system, is being used to reduce the amount of power used by the engine through boosts of hybrid power each lap during a race.

Toyota has been hard at work on this project since it announced its foray into the Le Mans Hypercar class back in 2019 at the Le Mans 24 Hours. Using its Cologne base to design the car itself and its team of experts at Higashi-Fuji in Japan to develop the hybrid powertrain, the countless lessons learned through its eight-year WEC programme to this point have helped it create a car which it expects to be a winner from Day 1.

While it will have to wait another year to pit the GR010 HYBRID against Peugeot Sport’s new LMH chariot, this season will not be without its challenges. Competing with a brand new car is never a simple, trouble-free task, as Toyota knows from years of near-misses at Le Mans with new machinery which it expected to go the distance after gruelling test programmes. But the Toyota Gazoo Racing outfit appears to be as ready as it has ever been. As a team it has matured nicely with age and knows precisely what it takes to create and run a championship-winning car.

Toyota isn’t ready to go into too much detail about its test programme with the GR010 yet, though it has given Travel Destinations some indications of how the car has performed over the past few months. No mileage stats are available, but we know from the past that Toyota is not afraid to push a new car to its limits with lengthy endurance tests that often feature more than 24 hours of continuous running.

Over the course of Toyota’s pair of three-day tests to this point – one of which was at Paul Ricard, the other at Algarve – no major issues have been reported and driver feedback has been encouraging. The only real hiccup thus far is lost track time due to its third planned test at Aragon getting cancelled, due to heavy snow.

Those of us trackside may not notice the stark differences between the GR010 and the TS050 immediately. But over time the shift in philosophy will become clear.

The car is 162kg heavier and produces 32% less power than its TS050 HYBRID predecessor, meaning lap times are set to be significantly slower (as per the new set of regulations curbing the performance levels to mitigate rising cost). This means the days of sub 3:20 lap-times at Le Mans are over, at least for the time being, with the GR010 expected to produce times around 10 seconds slower than the outgoing LMP1 model at La Sarthe.

For the drivers behind the wheel too, there are major differences. The fighter-pilot level of multi-tasking that its selection of drivers were forced to adapt to in the LMP1 Hybrid era – which included intense management of fuel flow and hybrid boost throughout each lap – has been eased with this new machine. What we have instead is a more efficient car, which will suit the pure racers among Toyota’s roster.

“I was not expecting it to be as fun to drive as it is; I thought it would feel like a GT car,” Sebastien Buemi explains. “But we learned a lot during our LMP1 era and we used that knowledge to improve the new car, so it feels like a prototype.”

Perhaps the most important aspect from the driver feedback to this point is the drivability of the GR010. “I already feel at home,” Mike Conway adds. Though not every driver has been able to get a feel for the new car just yet, as Travel Destinations understands that neither of Toyota’s Japanese drivers: Kamui Kobayashi and Kazuki Nakajima, have been out testing.

It remains to be seen how the GR010 will stack up against its competition in Year 1 of the programme, but the expectations are (deservedly) high, even with the new Balance of Performance system governing the class with the aim of creating parity.

This year Toyota’s main competition could well come from France as it competes against Alpine’s (multiple Le Mans class and WEC title-winning) factory team, running a grandfathered Rebellion R-13 LMP1 car (below), which is a proven race winner.

There will be other Hypercars on the grid in 2021 though, which may give us more of an idea of how sophisticated the GR010 is up against cars developed to the same ruleset.

US manufacturer Scuderia Cameron Glickenhaus’ new car is being assembled and readied for its first test as we speak. James Glickenhaus himself has told media members in the past two weeks that he doesn’t expect to be at Sebring to debut the car, but he has nevertheless thrown down the gauntlet by hiring 15-time Le Mans winning outfit Joest to run its effort. Anyone who witnessed the dominance of Audi Sport’s programme between 2006 and 2016 in particular, will not need reminding just how impressive Reinhold Joest’s crew are when facing monumental challenges from rival teams.

Then there’s ByKolles, which is developing its own hypercar too for 2021. The current status of the new car is unknown at present, though the Austrian team is often very secretive about its racing operations behind the scenes, so the radio silence shouldn’t be considered too much of a concern yet.

We will find out more very soon. With th full FIA WEC entry list set to be revealed next week, we’ll only need to wait a handful more days to see exactly what the field that Toyota’s new toy will be a part of looks like.

Want to be at the Le Mans 24 Hours this year? Act fast as availability is becoming limited for many of Travel Destinations’ accomodation options. Travel Destinations is also selling packages to FIA WEC races beyond Le Mans. You can contact our office by calling 01707 329988 or emailing info@traveldestinations.co.uk to get your next motorsport holiday booked.