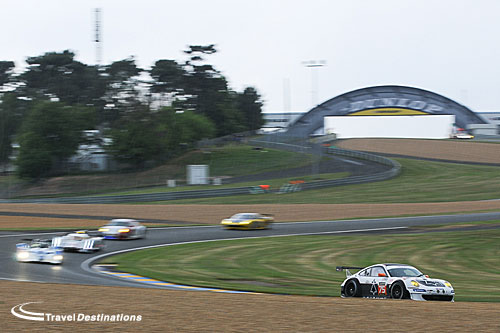 Audi Sport, with their #2 R18 e-tron quattro and Loïc Duval, took pole position for the 90th anniversary Le Mans 24 Hours. After a day of interruptions from weather and a number of accidents on Thursday, the time – a 3:22.349 – was set in Wednesday’s night qualifying session. The Audi cars had shown considerably better pace all throughout practice than their rivals, Toyota. #1, with Lotterer was second and #3 with Di Grassi third. Toyota’s TS030 was outclassed in qualifying, the #8 machine qualifying fourth but more than four seconds from the pole time. They must hope that their fuel saving advantage can serve them well in the race. Best non factory car was Neel Jani’s Rebellion Lola Toyota, the Swiss driver managing a 3:28.935, only 0.076 seconds behind the second Toyota. It bodes well for the chances of a good result for the fan favourite team.
In LM P2, Frenchman Olivier Pla, driving the Oak Racing Morgan Nissan #24, took pole with a late surge. A 3:38.621 saw off Mike Conway’s Delta-ADR Nissan, the Briton having sat on pole for much of the two day qualifying format – but he had to settle for second. Simon Dolan’s Zytek was third, with Oliver Turvey having set the time, meaning that there was a British driver in each of the top three LMP2 cars. It was an even better day for Great Britain in the GT classes, as Aston Martin swept the board. #99, with Fred Mako, stormed to pole in LM GTE Pro by nearly a second. His team mate Stefan Mücke in #97 was briefly pole with a 3:55.445 lap but he was swept aside by Mako’s 54.635. Their party was nearly spoiled by Marc Lieb for Porsche; the German put a 3:55.491 lap in, which was good enough for third on the factory’s return to Le Mans. The Am class was also the territory of the British marque. Allan Simonsen, in the all Danish crewed #95 Vantage GTE, romped clear. His 3:57.776 was top, with Paolo Ruberti proving the 997 Porsche is not out of the running yet by putting his #88 car second – 1.113 seconds behind. The #96 Aston Martin was third, with a 3:59.805 from Jamie Campbell Walter. Competition, though, is tight across all classes and it bodes beautifully for a race full of action.