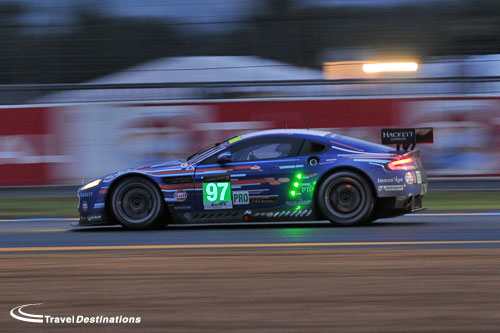 Audi Sport, with Loic Duval, Allan McNish and Tom Kristensen, won an emotional Le Mans 24 Hours, marred by the tragic loss of Kristensen’s countryman Allan Simonsen in an early accident. The race was chaotic and punctuated by a number of incidents, often brought on by inclement weather, but it was a fitting sight to see a Dane on the top step. It was Kristensen’s ninth victory in the race, further extending his record. The victory was hard fought and earned through solid running without mistakes, after both their Audi team cars suffered reliability issues and Toyota were not quite able to match the pace of the German machines. Toyota’s Sebastien Buemi, Anthony Davidson and Stephane Sarrazin took a second place, which in reality was probably the best they could have done with their machinery. They did at least complete their aim of a finish. Marc Gene, Lucas di Grassi and Oliver Jarvis rounded out the podium after small delays for damage earlier in the race, while Strakka Racing won the privateer P1 class. Nick Leventis, Danny Watts and Jonny Kane profited with a clean run against Rebellion Racing’s problems to win with their HPD. LM P2 was dominated by Oak Racing. Bertrand Baguette, Ricardo Gonzalez and Martin Plowman won the race with their Morgan Nissan, with team mates Olivier Pla, David Heinemeir Hansson and Alex Brundle second on the podium. The top five cars were all Nissan powered, with Roman Rusinov, John Martin and Mike Conway rounding out the podium with the G-Drive Racing Oreca. The GTE Pro class was a fantastic fight right from the start. It came down to a three way battle at the finish between Aston Martin’s #97 and Porsche’s two chargers in the final hours. Thanks to interruptions by the safety car, luck and some good judgement on tyre calls, the race fell in Porsche’s favour. Marc Lieb, Richard Lietz and Romain Dumas won in #92, with Joerg Bergmeister, Patrick Pilet and Timo Bernhard second in the #91 machine. Aston Martin’s Peter Dumbreck, Stefan Muecke and Darren Turner were denied at the very last and took third on the podium. The race was tinged with emotion and sadness after the loss of Simonsen, who had an accident in his Aston Martin Vantage on the third lap of the race, while leading his class, and despite immediate medical attention died in hospital a short time later. At the request of his family, Aston Martin Racing continued to race but were thwarted at the last in their attempts to “win it for Allan”.

If you wish to be at the Le Mans 2014 then you can reserve your travel, tickets, camping & other accommodation from Monday 24th June, by calling Travel Destinations on 0844 873 0203.