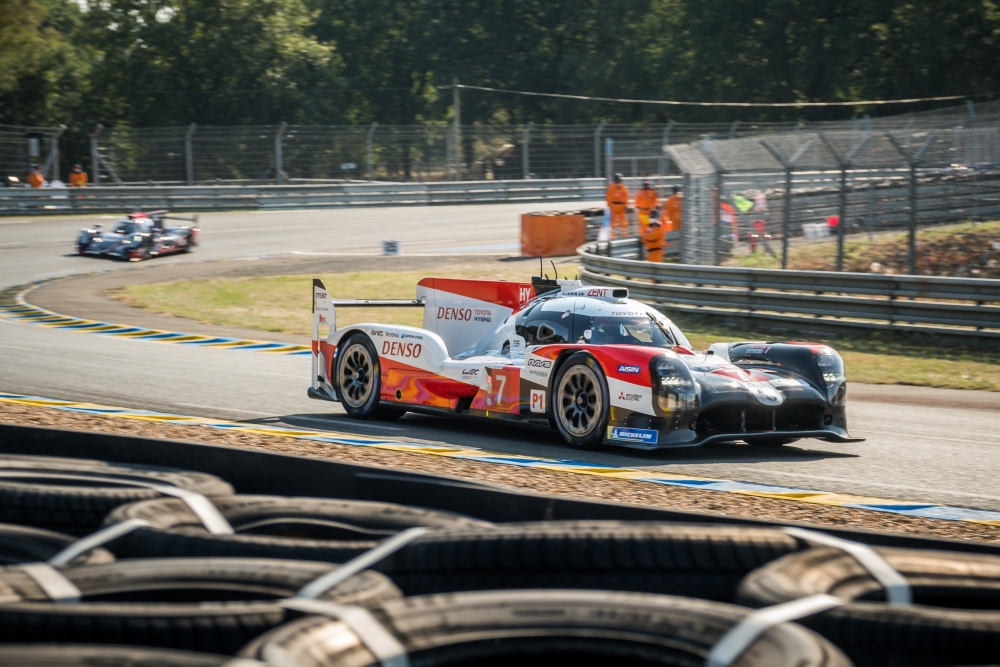 We’re not even through the first full day of track action at La Sarthe, and already there is plenty to talk about and ponder as we edge ever closer to raceday.

Here’s a few observations from Travel Destinations’ Stephen Kilbey after the opening sessions:

With Qualifying and the debut of the new ‘Hyperpole’ format right around the corner, there’s plenty of utterances about the circuit lap record being broken again by Toyota.

Thus far in practice, through the opening sessions, Toyota’s pair of TS050 HYBRIDs have already managed laptimes under 3:20, which in itself is impressive as it wasn’t long ago that a 3:30 at Le Mans would have been good enough for pole. This sort of performance level is equally impressive when you consider the efficiency too. Last year, with the same car lest we forget, Toyota managed to cover 500km more during the race at Le Mans compared to its debut with a Hybrid (TS030) LMP1 car back in 2012, and use 300kg less fuel.

So is it possible? Well, to be perfectly honest, even Toyota are not entirely sure. The current TS050 HYBRID, which admittedly is running a revised low-down force kit this year, would certainly be capable if it ran without restrictions. The issue is that this year the cars are hit with a less favourable Equivalence of Technology handicap than they were in ’17.

The other factor is the conditions trackside. While Le Mans is notorious for throwing up surprises on the weather front in June, a September race brings with it even more question marks. Will cooler track temps, and the condensed schedule allow for a surface more suited to rapid times come qualifying? It remains to be seen.

Speaking to Travel Destinations, a Toyota source said: “We don’t see a big chance (of breaking the record). The success handicap is gone for Le Mans but there is still EoT which is harsher on us than in 2017. With a clear lap and perfect conditions, given we have an updated low downforce kit, you never know but we’re not holding our breath. And we’re not focusing on it in terms of prep.”

Porsche already up to speed?

Looking at the GTE Pro field on paper, it’s clear that Porsche’s factory crews have the most work to do early in the week this year at Le Mans.

This is because the 911 RSR-19 has never competed at the Circuit de la Sarthe before, whereas Aston Martin Racing and AF Corse have two entire weeks worth of data to draw from since their current cars made their first appearances at the track in in 2018.

With no test day this year and a packed timetable over Thursday and Friday, finding the right set up will prove to be a real challenge. But if anyone can get up to speed quickly, it’s Porsche, and already we’re seeing how quickly the crew in the garages can get a baseline sorted.

After finishing up Free Practice 1 in 7th and 8th in GTE Pro (slowest in the class), the No. 92 managed to top the times in FP2 with a (3:52.783) time that was good enough to go six tenths clear of the field. A 3:52 though, is nowhere near the Pole time from last year (3:48), so there’s a ways to go in terms of performance gains as the drivers and teams find their rhythms and the track rubbers in.

Following FP2, times did tumble further for Porsche and the entire Pro pack in Qualifying Practice later in the day, as you’d expect. The best time was a 3:50.093 from the No. 95 Aston Martin. Interestingly, the two Porsches only just made it into Hyperpole, the two 911s fifth and sixth in the times.

Will anyone show their true hand before raceday anyway? In GTE Pro it is often unwise to do so, due to the Balance of Performance system that governs the class and has been known to be tweaked between Qualifying and the Race in the past. Thus, we will likely have to wait until Saturday afternoon to get a clear picture.

The first off was Paul Lafargue, who suffered heavy front-right damage to his #28 ORECA after going into the armco hard at the exit of the second Mulsanne Chicane. This is a notable drama, the #28 was considered among the favourites heading into this week, as the defending European Le Mans Series championship-winning car.

After a lengthy red flag period, once the session got going again, it wasn’t long before the second IDEC ORECA, the #17, hit trouble. This time it was Dwight Merriman, who also went head-on into the barriers, though on the drivers’ left on the run from the exit of the Porsche Curves to pit-in. (Thankfully both drivers are ok after their respective impacts.)

Now it’s down to the mechanics to push on and get both cars repaired in time to ensure the drivers get some more valuable track time in before the race. Both cars already missed out on Qualifying Practice, and therefore their shot at an appearence in the Hyperpole session tomorrow.

For better or worse, this year’s condensed schedule certainly doesn’t allow teams much time to bounce back from big incidents!

The stage is now set for the first ever Le Mans 24 Hours Hyperpole session tomorrow morning. Qualifying Practice this evening saw the six cars from each class granted their place for the shootout session, which promises to be frantic!

The entire LMP1 field has made it in, because there are only five cars on the entry this year. In LMP2 six ORECAs made the cut from Racing Team Nederland, Jackie Chan DC Racing, United Autosports (both 07s), G-Drive Racing (#26) and High Class Racing.

In GTE Pro, perhaps unsurprisingly the six FIA WEC factory cars made it in, the two privateer Ferraris from Weathertech Racing and Risi Competizione unable to find the required pace.

And finally, in GTE Am, Aston Martin Racing and TF Sport’s Vantages are in, as are Porsches from Gulf Racing, Project 1 (#56) and Dempsey Proton Racing (#77) and a single Ferrari from Luzich Racing.

Images courtesy of Porsche and Toyota