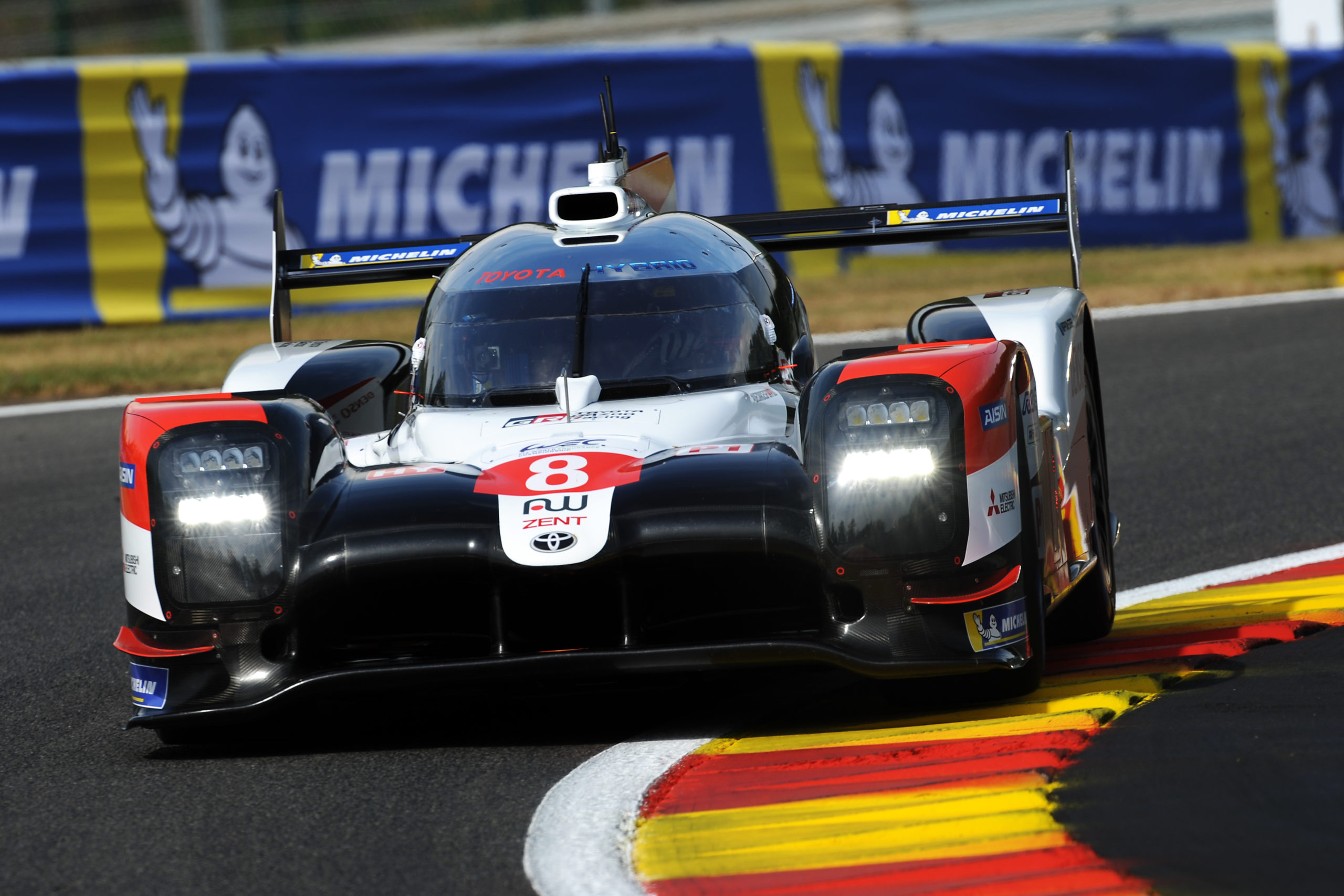 The stage is set, the teams are ready, it’s time for the 2020 edition of the Le Mans 24 Hours. A race of this magnitude, being held in these ‘unique’ circumstances, is certainly going to make it an event we won’t forget anytime soon.

With no spectators trackside, the race itself is the lead attraction this time. So what can we expect from each class? Travel Destinations’ Stephen Kilbey takes a look at some of the storylines to follow…

The LMP1 battle throughout the 2019/20 FIA WEC season has been an intriguing one. It hasn’t been the Toyota whitewash that many would have expected, because, to be frank, the ‘Success Handicap’ system has worked – almost too well at times.

The challenger to Toyota has been Rebellion Racing, which has only run with a single R-13 during the season and will bow out of the sport at the end of the current campaign. (Though it will race with two cars at Le Mans once again).

Rebellion powered to victory at Shanghai and later at Circuit of The Americas in Texas. In the latter Rebellion had a dominant run, the restrictions placed on the Toyotas after their 1-2 finish in Bahrain meant the non-hybrid, Gibson-powered prototype could produce substantially faster lap times than the TS050s, and comfortably took the win.

The question is, will it be able to sustain a challenge over a 24-hour period?

The good news from Rebellion camp is that last year, both its R-13s made the finish, in what was their second 24-hour race. The bad news is that neither made the finish in a clean run. The car has matured since then though, so if it gets a break on the handicap front, it has the drivers capable of keeping Toyota honest throughout.

The issue, as always in performance terms, is the inherit disadvantage their non-hybrid cars have up against the Toyotas which utilise hybrid-boost through traffic which can make a huge difference over the course of a long race, even if over a single lap in Qualifying the R-13s have the edge. The four-wheel-drive nature of the TS050 HYBRIDs also benefit in wet weather with superior grip. After a tough run at Spa prior to this weekend in changable conditions, Rebellion will hope that the rain stays away on this occasion.

If they can’t challenge then ByKolles – which has only been present at one WEC race since Le Mans last year – will be left with the surely impossible task of taking the fight to the Toyotas.

Should Toyota prevail, and it is clearly the favourite, then it would be three straight wins at La Sarthe, something which would have appeared unthinkable prior to 2018.

In recent years the LMP2 class at Le Mans has been getting stronger and stronger. The level of the drivers, the standard of the teams and the racing has all taken a step up.

As a result, in 2020 we have a another astounding entry of more than 20 cars, featuring the best teams from the FIA WEC, ELMS and even a handful from the Asian Le Mans Series – which adopted the current generation of LMP2 cars last season. Once again ORECA chassis make up the majority of the pack, but that shouldn’t detract from the racing, which should be fast and furious.

Who are the contenders? From the WEC pack United Autosports has to be considered the favourite. It has two cars entered in the race (one from the ELMS), both with strong driver line-ups, and is on track to take the LMP2 class titles in both championships. Richard Dean will hope his team can ride its current momentum into Le Mans and emerge with its first class win in what will be its first attempt with an ORECA.

The two JOTA-run, Goodyear-shod, ORECAs (one a Jackie Chan DC Racing entry) too should be considered a threat, after another strong campaign from Sam Hignett’s crew. If Goodyear’s tyres at Le Mans prove to be stronger than Michelin in the conditions, then it could swing the balance of power dramatically.

Alpine cannot be counted out either. It’s been a tough year for the French team in the WEC; its sudden retirement from the 6 Hours of Spa last month (its first in a WEC race since 2015!) only adding to its disappointing season. Nevertheless it is the defending class champion and will be eager to score its first win since last year’s Le Mans.

Beyond the WEC, G-Drive Racing will be looking for redemption after its hopes of victory were dashed late in the race last year. Its leading line-up features team stalwart Roman Rusinov, ex-F1 man Jean-Eric Vergne and up-and-comer Mikkel Jensen.

It also has a second Aurus in the race thanks to an invitation earned by winning the Asian Le Mans Series. It will be run by Algarve Pro Racing and includes a strong trio of drivers: Le Mans winner Nick Tandy, Mazda DPi factory man Oliver Jarvis and Rolex 24 class winner Ryan Cullen.

Another team to look out for is IDEC Sport. Fresh from a 2019 ELMS title run, the French team will also be looking to add a Le Mans win to its growing CV.

In year’s past the balance of power in GTE Pro has swung like a pendulum throughout the season, and even during race weekends due to the BoP process and the trials and tribulations of governing a class with so many different chassis.

While the numbers are down on recent year’s this time out, in part due to withdrawals from Corvette Racing and Porsche’s IMSA and the loss of Ford’s programme, the racing this time actually has real potential to be closer and more exciting.

With fewer cars to balance, the racing during the current WEC season has proven to be superb. Aston Martin, Porsche (with its revised 911 RSR-19) and Ferrari have all taken race wins and been involved in memorable race-long scraps. Add to that an additional Ferrari from Risi Competizione, which may be a private team but operates on the level of a factory effort despite having limited resources and we’ve got a real race on our hands.

And it will have world championship implications too, with all three marques looking to head into the finale at Bahrain ahead in the points tally. Right now the Dane Train Aston Martin of Nicki Thiim and Marco Sorensen lead the way and have been the duo of the season, the ones to beat, but who knows what form everyone will find themselves in once we get to the race?

After last year’s post-race disqualification for Ben Keating will be out to prove a point in the 2020 edition. Last time out his Wynns-backed Ford had its win stripped on Monday morning due to a fuel tank irregularity. There was no malice involved but the team took responsibility and accepted the outcome.

This time around Keating returns but with a completely different set up. The Ford has been parked and the Texan has taken his talents to German Porsche outfit Team Project 1. It’s been quite a season for him, a real rollercoaster, with a win at Bahrain the clear highlight and an 11th place finish on home soil in Texas back in February the lowlight. Alongside Jeroen Bleekemolen (and a rotating third chair of Felipe Fraga and Larry ten Voorde), Keating and his pursuit of redemption may well prove to be the story of the class in GTE Am as on his day he’s the best Bronze-rated driver in any field.

GTE Am is a category that is in rude health though, packed with intrigue. It features 23 entries with a bundle of ELMS, IMSA and Asian Le Mans Series teams adding to the full-season WEC pack.

Other teams to look out for will surely be Aston Martin Racing and TF Sport in the Aston camp, and AF Corse’s No. 83 488 GTE which is fresh from a win at Spa and leads the standings?

JMW and Dempsey-Proton Racing from the ELMS are always in with a shout too. Then there’s the WeatherTech Racing Ferrari from the IMSA ranks, which could well spring a surprise in this company.

Photos courtesy of Dailysportscar.com/Peter May