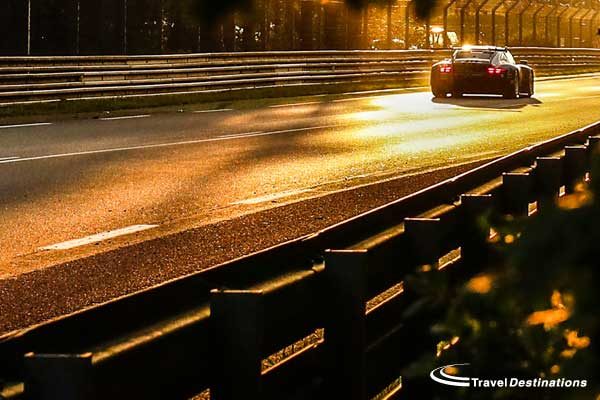 There are few events that people start planning the moment the previous one has finished. Christmas and the family holiday are probably on that list. Le Mans is definitely there.
Le Mans 2019 is already unique in that it will be the second Le Mans 24 hours in the one, not to be repeated, “Super-Season” of the FIA World Endurance Championship. From now on, the Le Mans 24 Hours will be the grand finale to a season that begins in September & October the previous year. If Le Mans could be any more important in the motorsport calendar, it will be now. 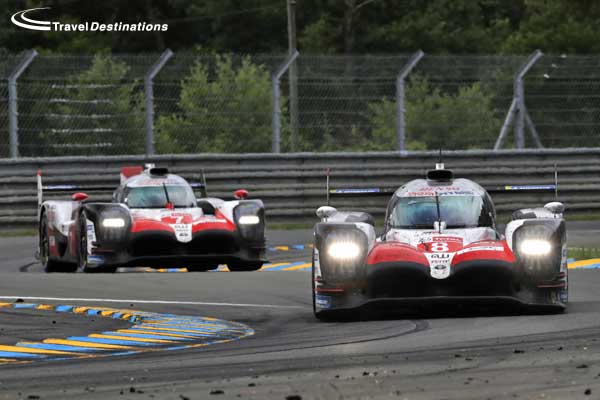 Toyota dominated the 2018 race, but there was also a lot of positives to be taken from the new private teams, who now have the invaluable experience of a Le Mans 24 Hours under their belt. Expect some rule changes and “balance of performance” tweaks to enable the privateers to close the gap on Toyota at Le Mans 2019.

We know what to expect from the LMP2 battle. In 2018 we saw both a chassis war and tyre war mix up the grid, but it will perhaps be remembered for the controversy that saw teams disqualified after the podium presentation for tampering with their refuelling rigs. That was a shame for quite a few teams that either had their trophies taken away, or that missed out on that podium feeling in the first place. Hopefully lessons will be learnt by everyone before Le Mans 2019. 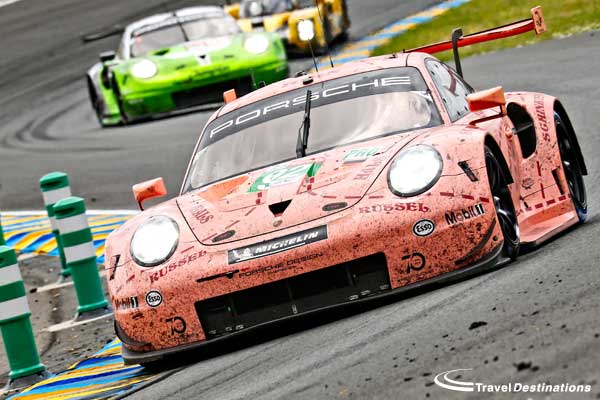 The GTE Pro battle was exceptional in 2018 & there is no reason to expect it to be any different for Le Mans 2019. Porsche’s retro-liveried cars were instant fan favourites and were cheered on by thousands as every lap went by. However, they were pushed all the way by a mixture of the Ferrari & Ford with the new BMWs not far behind. The older Corvettes and the new Aston Martin Martins looked great, but lacked the performance to back it up, but a year on don’t expect the same results.

GTE Am continues to deliver. There was competitive racing, errors, moments of exceptional skill and a popular winner in the best performing car. What more can you ask for? Same again at Le Mans 2019 please! 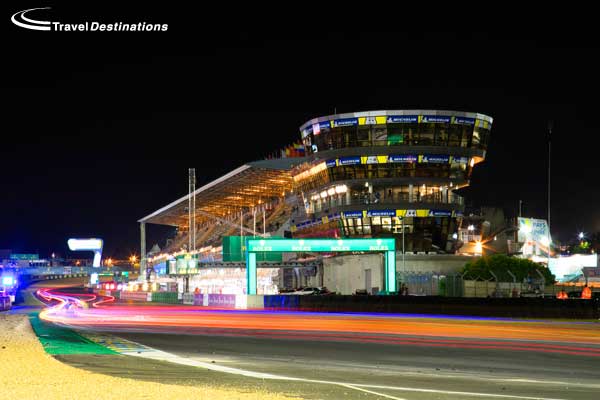 So now you know what to expect, why not join us track-side at Le Mans 2019? Travel Destinations are an official tickets agent for Le Mans 2019 and offer you the widest possible choice for you to stay at Le Mans and enjoy all the action. Here are just a few of the possible options:

Circuit Camping: Thousands of race fans camp at the circuit each year. Le Mans 2019 will be no different. The circuit run campsites such as Maison-Blanche, Tertre Rouge and Houx are all available through Travel Destinations. You will need to bring your own tent & expect to join a rowdy crowd at various locations around the track. Camping facilities will be basic at best but if you join in the party atmosphere you can have a great time. 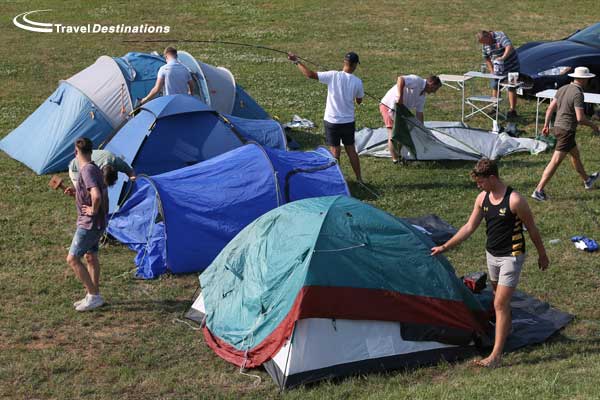 Private camping at Porsche Curves: Travel Destinations private campsite at the Porsche Curves remains hugely popular with race fans still wanting to camp, but preferring the added benefits of on-site security, serviced showers & toilets as well as hospitality marquee with café & bar exclusive to Travel Destinations customers. In addition, you also get the bonus of our very own exclusive viewing bank overlooking the fastest corner on the circuit!

Travel Destinations Event Tents: Our “Glamping” option is located across the other side of the track to our Porsche Curves campsite, but instead of having to bring your own tent, we provide a 5-metre diameter bell-tent, fully carpeted & complete with mattresses and all bed linen. The Event Tents benefit from security, serviced shower & toilet blocks as well as their own hospitality marquee for food and drink and all residents also have access to our private viewing bank at the Porsche Curves. 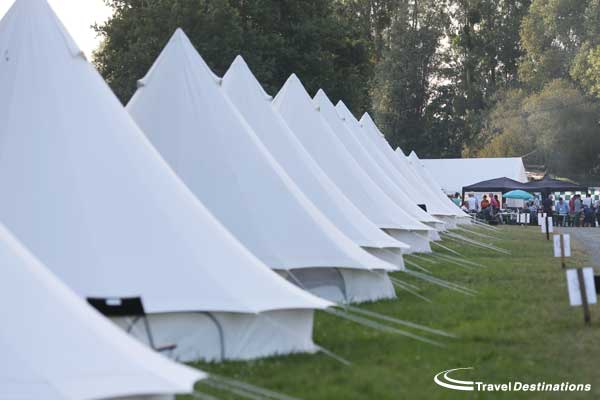 Travel Destinations Flexotel Village: Each year we build a “pop-up hotel” in the centre of the circuit. This Flexotel Village provides customers with their own bedroom at the track. Each room comes with 2 proper beds & all bed linen and towels and you can choose from a standard room with shared facilities or your own ensuite room with shower & toilet. The atmosphere amongst the Flexotels is calmer & more relaxed than elsewhere on circuit, but there is still a hospitality marquee serving food and drinks all weekend for those what enjoy coming together with other like-minded race fans over a beer or a BBQ. All this is just a short walk from the paddock or Tertre Rouge corner. 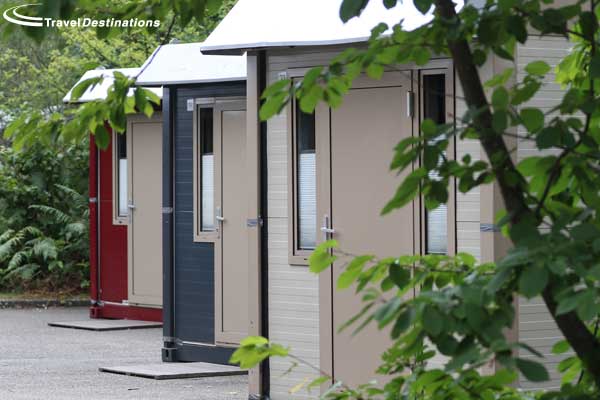 Hotel & chateaux offers: For some the lively nature of the busy circuit may be too much, so staying away from the circuit is a more comfortable option for them. Of course, there is the battle with traffic to get in to the circuit if you are driving, but some of our hotel options also have the option of using the excellent tram service to get to and from the track. Prices for nearby hotel rooms are not the cheapest options, but for those looking to enjoy the whole race week they are certainly a comfortable option. 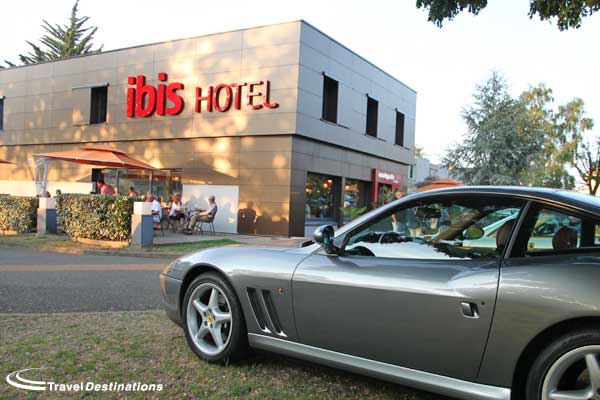 If you’re not sure which option is best for you, then why not call our team at Travel Destinations? Each member of staff has an intimate knowledge of Le Mans with multiple visits under their belts. They know the pros & cons of every option and will be happy to discuss the best option for you. 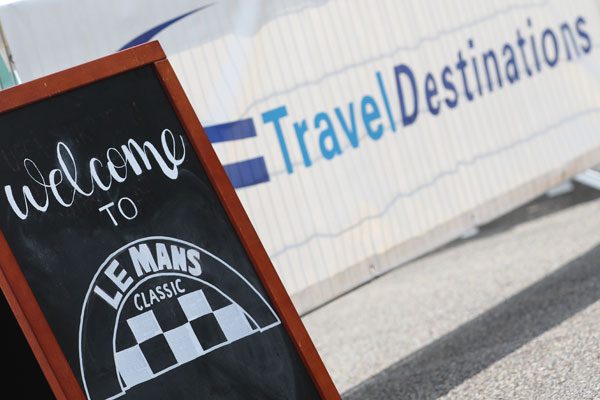 A relatively recent phenomenon in motorsport are the big historic festivals. In the UK, Goodwood; with the Festival of Speed and the Revival meeting, Silverstone Classic, and a host more besides, draw big crowds with a mix of on-track action and a festival atmosphere in the paddock and around the circuit grounds. The major European events have been building in popularity too: Spa-Francorchamps has the Spa Six Hours and Spa Classic events, Nürburgring’s Old-timer Grand Prix, Angouleme’s Circuit des Remparts and many more. The biggest, and arguably one of the very, very best is the Le Mans Classic – held every two years, this is the only event, aside from the Le Mans 24 Hours itself, that is permitted to use the full 24 Hours race circuit, with local roads closed to allow round the clock action. 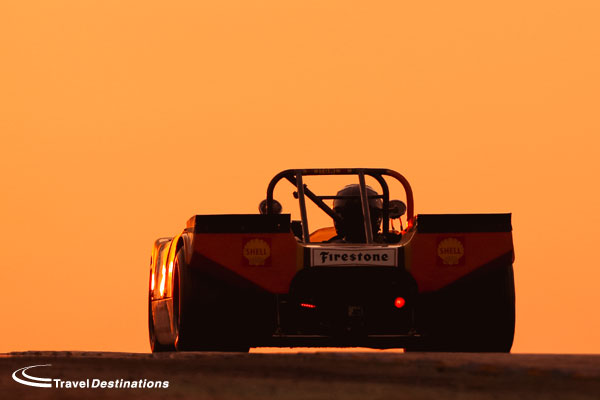 I was invited with my colleague Dave Lord, to attend the Le Mans Classic 2018 event as the guests of Travel Destinations, to take a look at what, for both of us, was a very different event in very familiar surroundings! We were accommodated in the Travel Destinations Flexotel Village – and whilst the container-like accommodation is perhaps not the most aesthetically pleasing, it proved to have massive advantages over the more traditional camping option. With comfortable overnight accommodation for two, plenty of storage space and a secure lock on the door it was an ideal operating base for the extended weekend. 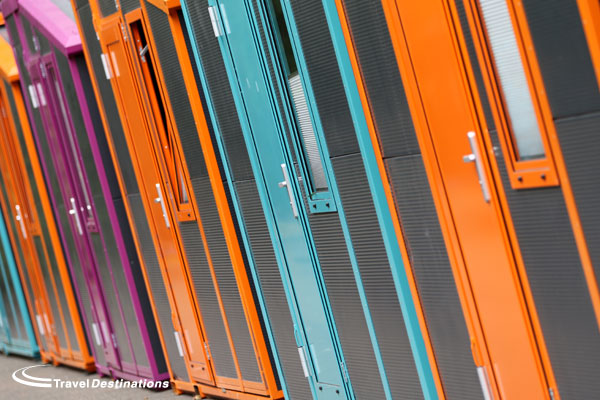 Very high temperatures over the full Le Mans Classic meeting might have left some sweltering – indeed our friends on the campsites reported that their tented accommodations were challenging in the conditions – but the tree-lined Flexotel Village wasn’t too bad, and our room was great when we installed a fan! Make no mistake these were extreme conditions – 30-34 degrees across the whole weekend! Our bathroom accommodation was in the central toilet and shower block – showers with perfect temperatures, kept spotlessly clean throughout the weekend- although for those after more privacy, a little more outlay saw some customers choose upgraded Flexotel rooms with their own bijou bathroom facilities! 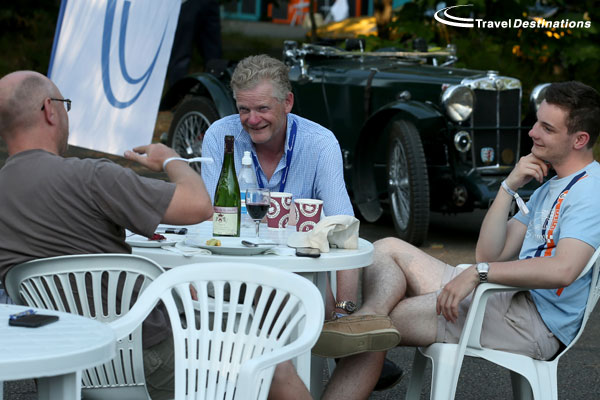 As the Le Mans Classic came alive on Friday, then the Flexotel Village filled up nicely, and the ambience became immediately apparent – very relaxed and very friendly – individuals, couples and groups of friends either chatting quietly outside their rooms with a glass of red wine or a beer, or clustering around the central marquee where food and drink was available late into the evening – together with a big screen TV – pretty much essential during the latter stages of a World Cup! There were,  I am very pleased to report, no rowdy groups, no fireworks – just people enjoying their, and each other’s company, and it was never, ever, crowded – a host of ordinary cars (ours!), sporty, exotic and classic cars parked alongside the rooms – Everything from an MGA, via a Jensen Interceptor and on to Lamborghinis, Ferraris and a beautiful Jaguar D-Type Replica – Just perfect! 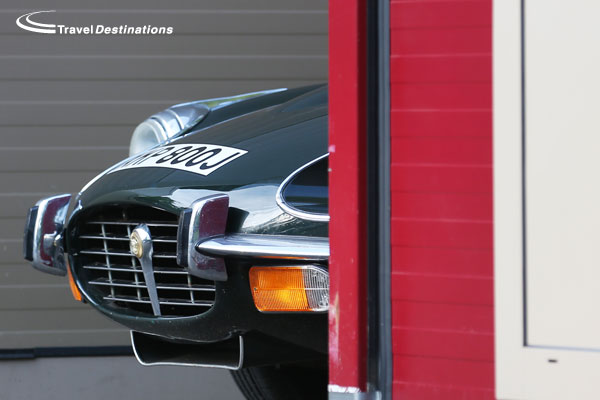 As for the Le Mans Classic event itself – Wow!

700 cars from 1923 to the present day, competing and displayed on track with some 1000 drivers – including some VERY big names. Competition continued through the night with the six main – age-defined groups of cars having 3 x 45 minutes races – with the addition of races for the iconic Group C cars (simply glorious!), Jaguar and Porsche period one-make encounters, plus a pair of very well attended demonstration runs for the “Global Endurance Legends”, for cars from the 90s and noughties – with a short season of races for these splendid machines coming in 2019! 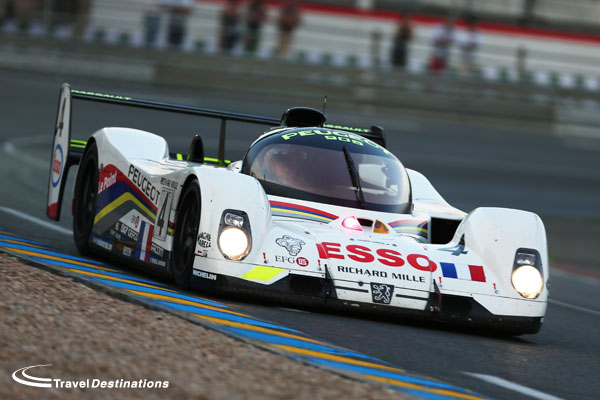 The ‘Le Mans Classic Village area’ was packed throughout with eateries, bars and exhibitions, a fine selection of stalls selling books, models, vintage bits and bobs and much more besides doing a roaring trade – I stumbled (thankfully not quite literally) across Derek Bell signing copies of his latest book at one stall. 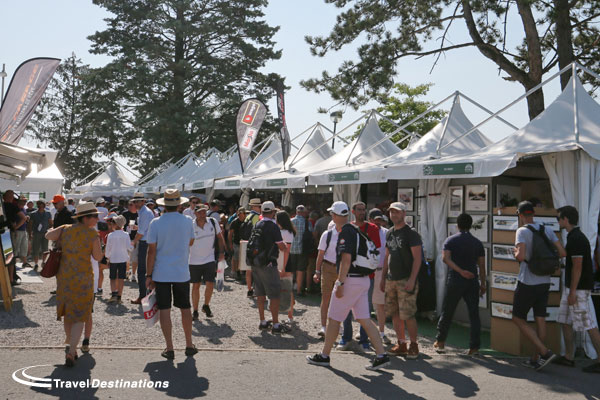 And then there’s the ‘set dressing’ and the other main Le Mans Classic attraction – Thousands of classic cars in the club displays on the infield and around the shorter ‘Bugatti’ circuit – all friendly and welcoming, all with a common spirit to revel in petrolhead heaven. Love Renault Alpines? There were simply dozens, Porsches? Hundreds – Something more obscure? Believe me it as likely in there somewhere! Best of all if you regularly attend the big UK, or US historic festivals, there was plenty here that you likely haven’t seen before. 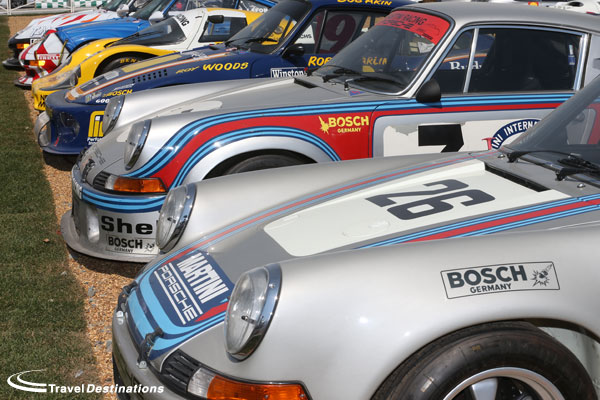 Around and between all of this the Le Mans Classic VIP shuttles were all Citroen 2CV or the Mehari derivative; the competing drivers shuttled around in a bewildering variety of VW ‘buses’ – and the public shuttle buses to take fans out to the more far flung viewing spots were ‘period’ too! Competing cars were escorted through the event either by Gendarmes in period uniforms on historic police motorbikes (with the ever-present whistle!) or by actors dressed 1940s US Military police on rumbling Indians and Harleys complete with the wailing siren – Evocative stuff. 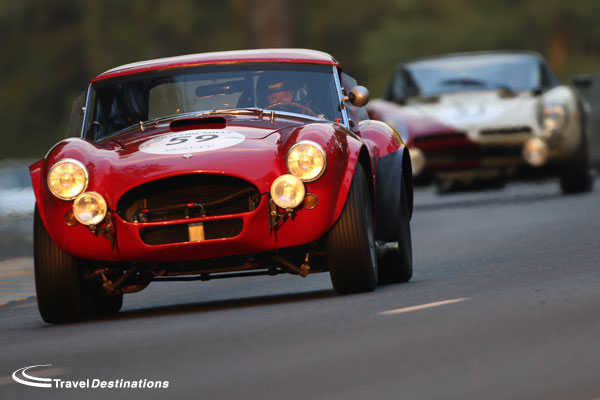 Better still if the scale of the event, or just the heat, got the better of us, it was a short walk back to the Travel Destinations Flexotel Village, where, even in the thick of on-track action, there was an oasis of calm – the cars could be heard – but you could hear yourself think, grab a drink or have a nap – the Flexotel’s sound insulation proving ideal for the task. 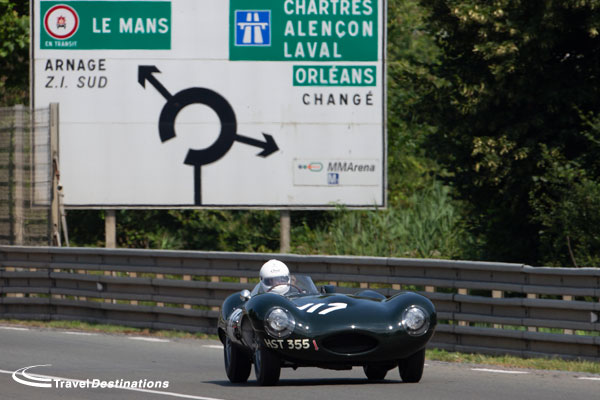 If you love the historic scene then the Le Mans Classic is a simply unmissable event – We’ll be coming up with excuses for another invitation – You should pencil it into your 2020 calendar too- and then get on the phone to Travel Destinations to reserve your place!